Of course they would. 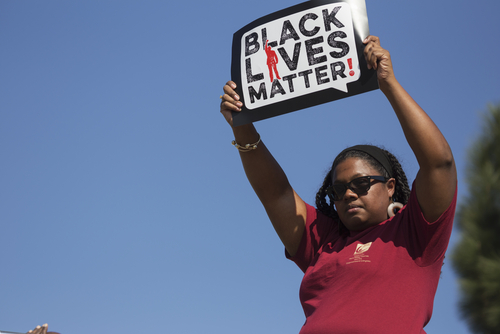 Because the movement is more closely tied to liberal politics, because it involves supporting LGBT black lives, because it’s critical of law enforcement, conservative evangelicals are having a tough time getting on board with an idea that supporters would say is simply about civil rights and fighting against institutional racism.

Mark Oppenheimer writes in today’s New York Times about the struggle facing these Christians and the reactions from both sides after a supporter of the movement spoke at a major Christian conference.

I’m sure a lot of evangelicals are wrestling with this issue, but their hesitation speaks volumes to everyone else. And this isn’t the first time they’ve been caught in this position. Remember: Bob Jones University didn’t drop its ban on interracial dating until the year 2000. As we speak, Wheaton College in Illinois may fire one of its only black professors over a theological disagreement after she said Muslims and Christians worshiped the same God. And we know how prominent evangelicals in the Republican Party have made it their mission to block damn near everything President Obama wants.

I can see why black people might think evangelicals don’t have their best interests at heart. Their actions and political positions are a dead giveaway. It’s no wonder their message is so unappealing to those of us who really do care and aren’t afraid to show it.