In Colombia, Video Supposedly Shows Man Taken Over by Godly Spirit Before He Can Stab Priest January 22, 2016 Hemant Mehta

In Colombia, Video Supposedly Shows Man Taken Over by Godly Spirit Before He Can Stab Priest

The latest viral video in this genre apparently catches a man who’s about to stab a priest at the Pentecostal IPUC Bosa church in Bogota, Colombia. But just as he gets up to do the deed, he falls to the floor in convulsions as if God is stopping him.

You can see the video below; the relevant portion begins at the 4:18 mark: 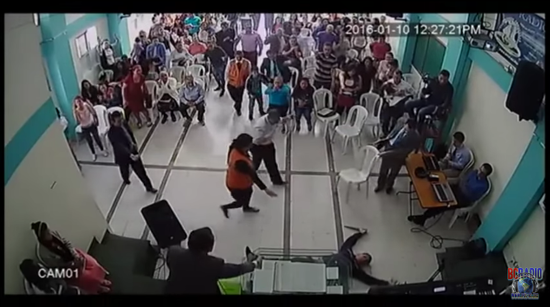 There are plenty of reasons to question the supposed miracle.

Like the “show” the killer puts on between getting up out of his front row seat and running on stage.

Like how the priest, Pedro Pablo Martin, said to the media that the killer told him before the service he was going to stab him, but he chose not to do anything about it. (The priest told him to take a seat and listen to the sermon.)

Like how the church decided not to prosecute the unnamed man afterwards, opting instead to “leave his fate in the hands of God.”

(Some people have pointed to how the security camera zoomed in on the individual before he ever did anything wrong, though that’s just video editing after the fact.)

The pastor called the video “100 percent authentic,” but that’s also what he says about the Bible, so you have to take it with a huge grain of salt. If it is indeed a publicity stunt, that’s really messed up.

January 22, 2016
Marco Rubio is Now Using His Conversation with an Atheist to Raise Money for His Campaign
Next Post

January 22, 2016 Saudi Top Cleric Claims That Chess Is the Devil's Game
Browse Our Archives
What Are Your Thoughts?leave a comment