Darrell Trigg, the Sole Candidate for the Christian Party, Has Been Charged with Stalking His Ex-Wife January 22, 2016 Hemant Mehta

Darrell Trigg, the Sole Candidate for the Christian Party, Has Been Charged with Stalking His Ex-Wife

Darrell Trigg is the Presidential candidate for the Christian Party — a party that I’m pretty sure has a total membership of one — and his platform is a mish-mash of right-wing talking points. 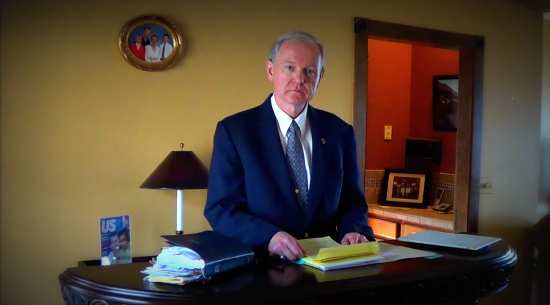 He wants to eradicate separation of church and state, bring mandatory prayer back to public schools, stop any legal recognition of homosexuality, increase the drinking age to 25, and ban nudity and bad language on television.

And then you get to the part about how he would protect marriage:

Marriage will be defined as the union of one woman with one man.

The legal age for marriage will be 22.

A couple wishing to get married must first attend Christian marriage counseling classes.

Divorce will only be allowed in cases of abuse, infidelity, or incarceration.

The penalties for abuse and infidelity will include large fines and jail time.

That’s an interesting platform to have… especially when, as a reader pointed out last year, Trigg himself got divorced in 2013.

(You won’t find that nugget anywhere in his biography.)

According to the document (which included the same full names and place of business found on Trigg’s campaign website), the grounds for divorce were “irreconcilable differences and, alternatively, inappropriate marital conduct.” In proceedings that lasted for nearly three years, Trigg said that his religious beliefs were a reason “not to allow the dissolution of their marriage,” but the courts allowed it, anyway.

Now, this shouldn’t be any of our business. I’m not pointing this out just to try and embarrass the guy. But when Future President Trigg says he’ll only allow divorces in the cases of abuse, infidelity, or incarceration — and when the penalties for abuse and infidelity include fines and jail time — we have to ask: Which of those “sins” did Trigg commit? Was he incarcerated? If not, how much of a fine does he think he should have to pay and when’s he going to jail?

Anyway. That’s old news. I figured we were done hearing about him. But Trigg is now back in the headlines.

He’ll be appearing in court next week after being accused of “criminal trespassing and telephone harassment” of his ex-wife:

Richard “Darrell” Trigg, 56, of Rogersville, is scheduled to appear in Hawkins County Sessions Court Jan. 27 on a private prosecution warrant filed by his ex-wife, Lori Jones.

Jones filed a complaint against Trigg on Dec. 26 alleging she saw Trigg sitting in his Jeep Cherokee behind her house on Shepherds Chapel Road just west of Rogersville.

“She showed me in her court paperwork where he has no right to be on her property,” said HCSO Sgt. Michael Allen, who took Jones’ report. “This is an ongoing issue. Every time she leaves and goes out of town, her neighbors inform her that he shows up there every day.”

Trigg has yet to file the official paperwork for his Presidential run, but at this point, he ought to resign from the Party he seems to have created for himself.

(via Peacock-Panache. Thanks to Brian for the link. Large portions of this article were published earlier)

January 22, 2016
Oklahoma Legislator Introduces Yet Another Bill to Permit Teaching of Creationism in Public Schools
Next Post