The home of a prominent atheist professor in Jerusalem was vandalized this morning. The apparent hate crime was committed, it seems, by religious zealots who want to stop him from destroying the faith of the Israeli people.

Professor Yaakov Malkin is a leader of Tmura, the Israeli affiliate of the International Institute for Humanistic Secular Judaism. He’s been a secular activist for the past 50 years, and an organizational leader for the past 20. His group trains Secular Humanistic rabbis to serve the many, many Jewish people who don’t identify primarily as religious.

Malkin’s home was defaced with Bible-verse graffiti, a knife, and a threatening note: 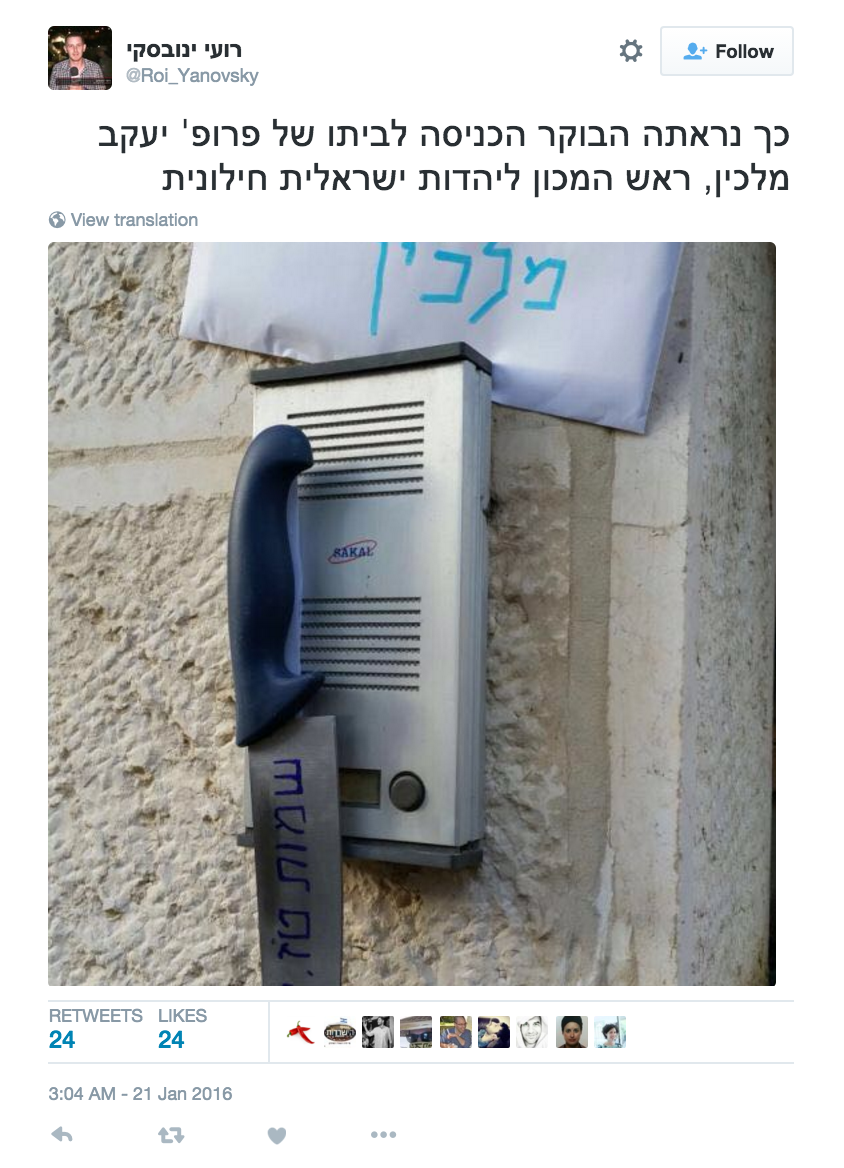 A Star of David and the phrases “Psalms 139: 21-24” and “Destruction of Amalek” were scrawled on the fence surrounding his home. A knife and an envelope containing a threatening letter were also found at the scene, reading “a Jew whose hands are bloody resides in your street. This Jew received a severe warning.”

The letter to Malkin said, among other things, that “this is a warning for you to immediately end all atheist and heretic activity that you take part in or lead. You must absolutely and immediately stop your actions to dismiss and incite the people of Israel from their God.”

“Should you continue your actions following this warning, know that you are yourself choosing to forsake your fate and future. Do not cross the line. This isn’t a futile warning, it is completely and absolutely serious, treat it as one. You will not receive another warning,” it said.

The letter was signed, “your brother who brings to you the word of God your creator and king, the father still waiting for your return to him.”

The people of Amalek, if you’re unfamiliar, are considered enemies of Israel in the Bible.

The threatening note also included a reference to Exodus 16:14, though that may be a mistake:

The reference from Exodus seems to be a mistake, as the corresponding passage describes the manna given by God to feed the Israelites during their travels in the desert.

The graffiti is most likely referring to the same verse in chapter 17, which expounds on the edict to destroy the Amalekites.

These vandals can’t even get their Bible references right…

Police are currently investigating the threat.

My friend Rabbi Adam Chalom is the Dean of North America for the International Institute for Secular Humanistic Judaism (the same organization Malkin runs in Israel), and he sent along this explanation and commentary after hearing about the vandalism (emphases mine):

Yaakov Malkin has been a leader in organized Secular Humanistic Judaism for over two decades, and he now serves as the Provost of the International Institute for Secular Humanistic Judaism. Even earlier, he was active in secular Israeli Jewish culture, founding the first Jewish-Arab community center in Haifa and successfully arguing for Jewish community centers to be open on Saturdays (the Jewish Sabbath). He has long advocated on behalf of Judaism as a culture rather than exclusively or primarily a religion, and for atheism as both a rational approach to life and in harmony with cultural Jewish identity.

His daughter, Rabbi Sivan Malkin Maas, was the first Israeli ordained as a Secular Humanistic Rabbi by the International Institute for Secular Humanistic Judaism in suburban Detroit in 2003. Soon after, she helped to found Tmura-IISHJ in Jerusalem, which has trained dozens more Secular Humanistic rabbis to serve the estimated 40% of Israeli Jews who self-identify as secular. Professor Malkin has served as primary faculty for Tmura-IISHJ since its inception. These Secular Humanistic Rabbis provide counseling and education, life cycle ceremonies (including secular weddings in defiance of the Orthodox monopoly in Israel), and advocate for separation of synagogue and state.

The International Institute for Secular Humanistic Judaism – North American Section, at which I am the Dean for North America, has provided programming, financial and moral support to Tmura-IISHJ since its inception, and we strongly stand with our partners despite any threats and intimidation. They are providing a voice of sanity and reason for thousands of secular Jews in a place that sorely needs it.

More on this as it develops.