Asking Marco Rubio How He’d Protect the Rights of Atheists Is Not a “Gotcha” Question January 21, 2016 Hemant Mehta

I recently posted about how atheist Justin Scott asked Sen. Marco Rubio a question during a campaign stop in Iowa. It was essentially the same question he’s asked all the candidates he’s met. Justin wanted to know how Rubio would defend the rights of atheists — and protect the separation of church and state — if he were to be elected. 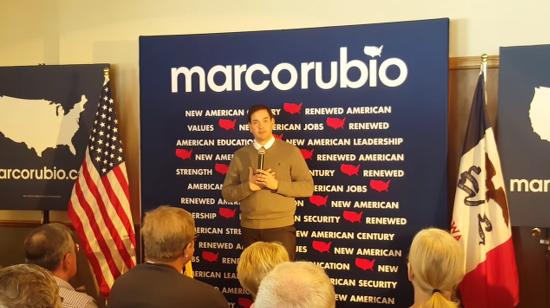 Justin was concerned about an ad Rubio recently put out touting his Christian faith. This is how he phrased the question:

I’m an atheist voter. I represent millions of atheists and non-theists around the country. One of the fastest growing voter blocs. And you said earlier that you wanted to stand up for religious freedom and all of that.

My question is: For atheist voters that are looking for somebody that will uphold their rights as Americans, and not pander to a certain religious group, I just noticed your recent ad. It mentioned nothing about policy, it mentioned nothing about ideas, and it simply talked about wanting us to follow faith, and find God, and go to Heaven, and things like that. Which is fine for those people that align with you.

My question is: how do you plan on upholding our rights and focusing on non-theists… because there’s talks in our community about running as “pastor in chief” instead of commander in chief, so I’m curious your thoughts.

Totally fair, right? Well, Rubio gave a good response, too, at least if you’re a conservative. (A quick search for “Rubio” and “Atheist” online will show you just how popular it was.)

But the reason I bring it up is because of how Christian publication Charisma reported the exchange. They didn’t just say they liked Rubio’s answer. They acted like Justin lost some sort of cosmic battle.

The headline reads “Atheist Fails Miserably With Gotcha Question Directed at Marco Rubio”… and it only gets worse from there.

Getting a “gotcha” question from an activist for another candidate, or for those pushing a specific issue, is not uncommon in any election campaign.

But, in presidential election politics, they can sometimes be devastating to a candidate who swings and misses. During a recent campaign stop in Iowa, Marco Rubio swung and didn’t miss.

After opening up to questions from the audience, Justin Scott, a self-described atheist who has been following the candidates on the campaign trail and asking them about religious liberty and “separation of Church and State,” asked his gotcha question:

Help me out here:

What exactly was the “gotcha” question?

And how did the atheist “fail miserably”? (Or “fail” at all?)

Justin didn’t ask a “gotcha” question. He asked a question, period. It’s not like Justin was trying to get Rubio to inadvertently say “When I’m President, I’m gonna deport atheists.”

There was nothing devious or unfair about this. It just shows you how the people at Charisma think. They have to exaggerate everything to play up the Christian Persecution Complex. Because lying is okay as long as you’re doing it for Jesus.