Christian Pastor Steven Anderson has never been a fan of feminism.

He has said his daughters “are gonna be taught not to be independent.” And that “normal” women want to follow a leader (that is, unless they’re “reprobate lesbians”). And that women should have no say in how our country is run.

So, by comparison, saying feminism “gives Christianity a bad name” is really anti-climactic. It’s like he’s mellowing out. 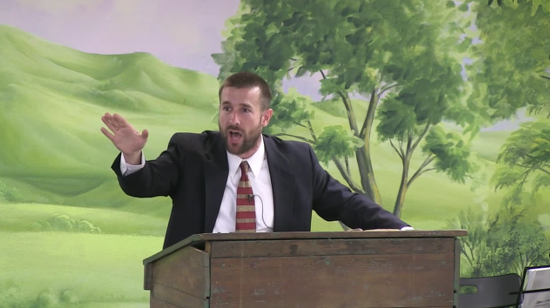 … What does the Bible say is gonna happen when wives are not obedient to their husbands? It’ll cause the Word of God to be blasphemed! That tells me that feminism gives Christianity a bad name!…

… Islam is a wicked, wicked religion, but the fact that Christians today have bought into feminism causes the name of Christianity to be blasphemed among the Muslims today!

All of this was followed by a story about a non-religious guy he knows who told Anderson he wished he had a biblical marriage in which his wife obeyed him because his own pro-feminism marriage failed. Because pastors’ anecdotes are always true.

It’s ironic that Anderson criticizes Christians for being too feminist when most of us outside the church think the whole damn faith is incredibly oppressive toward women. But what more do you expect from a man who thinks female pastors are committing a sin?

Maybe the worst part about the video is that you can see women in the audience going along with this drivel. Frightening, no?