Carly Fiorina Tells Atheist That “Christians Are Being Coerced Not To Practice Their Religion” January 20, 2016 Hemant Mehta

Yesterday, at a Carly Fiorina rally, he asked the Republican two questions. One was about her support of vouchers (which church/state separation advocates oppose because they allow taxpayer money to fund religious schools) and the other was about her take on religious freedom. The questions were arguably linked since Justin, as an atheist, could say it violates his own beliefs to fund a religious school.

Fiorina gave what amounted to a stump speech on vouchers… but her response to the religious liberty question ended up being all about how Christians are being persecuted. 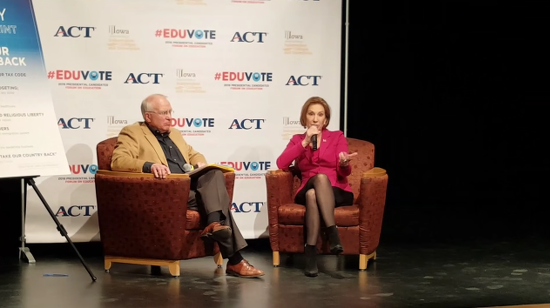 You’re free to believe whatever you’d like in this country. So if you’re an atheist, good for you. I happen to be a Christian. I happen to believe that our Christian values help me as a leader, because they make me humble and empathetic and optimistic. And I think all of those qualities are vital in leadership.

Yes, it’s very hard practicing your faith when you’re in the majority, isn’t it…?

In the case of the Little Sisters of the Poor, they believe their religious freedom is under attack because they have to fill out a form saying they don’t want to pay for insurance that covers contraception, because that form would allow the government to provide an alternate way for employees to get contraception… and then Baby Jesus would cry.

For someone who thinks she’s humble, Fiorina sure is confident with her bullshit.

I asked Justin what he thought of her answer. I knew he wouldn’t agree with it, but did he appreciate her response? He told me:

It was probably one of the most un-empathetic answers that I’ve gotten during this whole experience, and that even includes the cold shoulder that I got from Donald Trump; at least the Donald signed an autograph for me, thanked me for coming, and told me to take care as he walked away from me.

January 20, 2016
Here's a Video of a Catholic Priest Smacking Kids Upside Their Heads
Next Post