One of my all-time favorite segments from The Daily Show was the episode in which Jon Stewart examined the bizarre love-hate relationship that American conservatives seem to have with Vladimir Putin. It was hilarious, particularly when juxtaposed with conservatives’ hate-hate relationship with their idea of the weak, mom-jeans-wearing tyrant dictator King Obama.

But there’s more to Putin than a quick-acting, horse-riding, bear-wrestling, non-Mom-jeans-wearing President. And it’s the sort of stuff Republican dreams are made of.

You see, like so many conservative religious leaders in America, the head of the Russian Orthodox Church, Patriarch Kirill knows who to blame for things like the rise of ISIS: religious extremism, he says, is a result of secularism. And gay people. 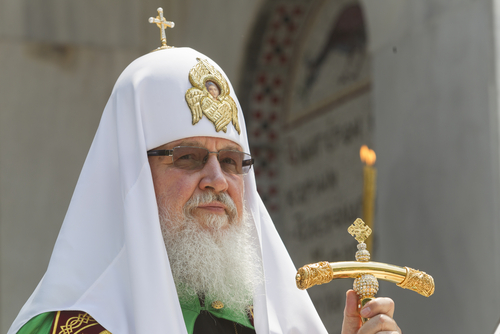 No surprise there. I mean, American Christians have already figured out that gay people are responsible for tornadoes and autism, hurricanes, earthquakes and tsunamis. So it was just a matter of time before someone figured out the link to terrorism.

These revelations came in an interview, the transcript of which the church posted on its website. In it, Kirill explains that ISIS is essentially a reaction to the horrors of secularism:

[ISIS] is creating a civilization that is new by comparison to the established one that is godless, secular and even radical in its secularism.

In this “radical” godless society, he alleges,

We can have parades for the sexual minorities — that is supported — but a million French Christian protestors defending family values are broken up by police. If you call non-traditional relationships a sin, as the Bible teaches and you are a priest or pastor, then you risk not only your ability to serve but you may be sent to prison.

As referenced by the Christian Post, this focus on “non-traditional” relationships is mirrored in recently proposed Russian legislation that would penalize public displays of affection, like holding hands, by “non-traditional” couples. Like anti-gay American Christians, Kirill doesn’t seem to think the actual targeting of his gay countrymen is “radical” in any way.

On the contrary, he’d rather focus on the imaginary threats of radical secularism than the real harms of radical Christianity.

In this sort of thinking (as well as his homophobia), the Patriarch found some common ground with ISIS’ declared caliphate, describing it as

… a society centered around faith and God where people follow religious laws.

Which, I guess, is where Kirill really jeopardized his relationship with American Christian conservatives.

Attacking gay people was definitely a plus, but he has to be careful that he doesn’t sound too supportive of Muslims — even if their goals are similar.

But, hey, at least he wasn’t wearing mom-jeans. So there may be a future for American conservatism and Russian Orthodoxy after all.

January 19, 2016 If Your Biology Professors Believe in Adam and Eve, You're Not Getting a Proper Science Education
Browse Our Archives
What Are Your Thoughts?leave a comment