If Your Biology Professors Believe in Adam and Eve, You’re Not Getting a Proper Science Education January 19, 2016 Hemant Mehta

If Your Biology Professors Believe in Adam and Eve, You’re Not Getting a Proper Science Education

A month ago, when the brouhaha at Wheaton College (in which a professor got in trouble for saying Muslims and Christians worshipped the same God) was just developing, Religion News Service reporter Jonathan Merritt described the school this way in an attempt to show it was relatively liberal when compared to other Christian colleges:

Founded in 1860, Wheaton has long been considered a fairly open-minded institution within evangelicalism. Science professors can teach evolution, government professors need not support conservative political theories, and students don’t have to worry about strict dress codes or stringent curfews like students at more fundamentalist colleges. In 2003, it eased bans on alcohol consumption and dancing.

Fred Clark, a Christian blogger here at Patheos, zooms in on that phrase — “Science professors can teach evolution” — because, he says, it’s indicative of a much larger problem at the school: 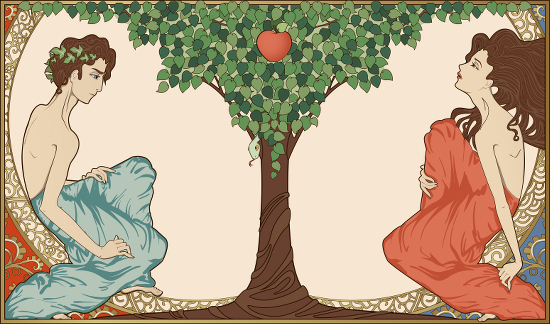 Take a moment to absorb the strangeness of that phrase “science professors can teach evolution.” Science teachers can teach science. They can do so. It is permitted as one of the options allowed to them. That’s just … weird.

It’s like reading that chemistry professors have permission to mention the periodic table of the elements. Or that history professors are permitted to acknowledge the existence of Europe.

He’s absolutely right. How awful must a science department be when teaching evolution is merely permitted?

Clark goes on to point out that that’s not even true! Because professors still have to sign a Statement of Faith saying they believe in a literal Adam and Eve.

WE BELIEVE that God directly created Adam and Eve, the historical parents of the entire human race; and that they were created in His own image, distinct from all other living creatures, and in a state of original righteousness.

That goes against everything evolution teaches us, since real scientists understand that humans aren’t any more “special” than other creatures and the process sure as hell didn’t begin with two fully-formed human beings.

In what illustration of the Tree of Life do Adam and Eve form the trunk?

And how can biology professors accurately teach evolution if they have to push Creationist ideas in there? Even if Wheaton permits theistic evolution to be taught, it still goes against what the evidence shows: evolution is a natural process that requires no supernatural input.

This is the “smart” Christian school? Please.

That’s not to say the students and professors accept this nonsense — I’m sure there are many who sign the statement just like I accept the Terms and Conditions statement on iTunes. But if students want a quality science education, they won’t find it at a school that forces professors to accept Creationism as a prerequisite in hiring.

So while a lot of media attention is being paid to a particular theological debate at Wheaton, remember this: The very notion of a “Statement of Faith” that includes objectively untrue statements goes against what you’d expect from a quality school.

Be sure to read Clark’s full piece here.

January 19, 2016 Catholic Schools Fight Unions, Even Though Catholic Teaching Says Unions Need Protection
Browse Our Archives
What Are Your Thoughts?leave a comment