Move over, birth control. Stand aside, marriage equality. Catholic organizations have found a new menace from which they must shield themselves by invoking their freedom of religion: collective bargaining.

It’s like a conservative’s dream come true: in addition to the standard reasons why empowering workers is a terrible thing, Catholics are now adding “God says so” into the mix. 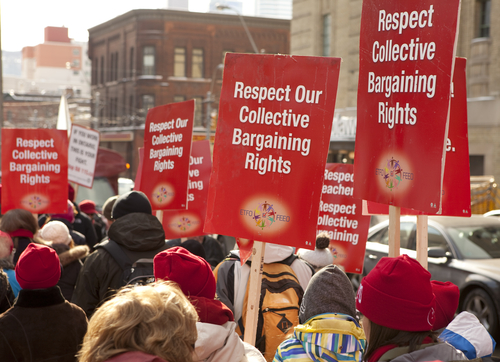 Huffington Post reports that this curious line of defense against unions is making an appearance in several Catholic schools:

Manhattan [College] is one of a gaggle of Catholic colleges now holding up their spiritual mission as a shield against collective bargaining. At least four other schools — Seattle University; Duquesne University, in Pittsburgh; Saint Xavier University, in Chicago; and Loyola University Chicago — have recently sought religious exemptions from labor law that would scuttle faculty organizing campaigns.

Unfortunately, for the intrepid geniuses behind these cost-saving efforts, there is a small problem with claiming that collective bargaining goes against Catholicism: it’s not true.

In fact, opposition to unions is pretty staunchly at odds with Catholic teaching and directly contradicts the words of some Popes.

Critics of that stance quickly point to Rerum Novarum, the encyclical on capital and labor issued by Pope Leo XIII. In this 1891 open letter to the Catholic bishops, the pope offered a few prescriptions for alleviating the “misery and wretchedness” he saw among the working classes of the Gilded Age. Near the top of his list was the right to free association with groups that can close the gap between rich and poor. “The most important of all are workingmen’s unions,” the pope wrote.

Just six years ago, in his encyclical Caritas in Veritate, Pope Benedict XVI wrote that his predecessor’s appeal for unionism was even more relevant in an age of globalization. Unions, the pope said, were becoming too weak to effectively advocate for the working class. Calls to promote collective bargaining, Benedict urged, “must therefore be honored today even more than in the past.”

But don’t expect many religious institutions to honor their commitment to religious principles when money is at stake. It’s like how they believe a fetus is a person… until that personhood might cost a Catholic hospital money in a wrongful death lawsuit, in which case they’ll totally admit it isn’t. (Until that stance makes news, in which case, never mind, it’s a person again!)

Similarly, collective bargaining must be honored… unless it costs Catholic schools money, in which case, screw the unions. They’re a form of government oppression, after all:

In a statement to HuffPost, Manhattan said its adjuncts play an “indispensable role” at the school, but it must be able to manage its relationship with them “free of [government] oversight.”

“We believe that it would be irresponsible not to question vigorously the right of the government to insert itself into decisions that directly affect the heart and soul of our institution, not because of opposition to employees or antipathy to the rights of working people,” the college said.

It’s worth noting that not all Catholic schools buy into the religious freedom argument against unions:

When [the Service Employees International Union] submitted a petition on behalf of contingent faculty at St. Mary’s College of California in 2014, the school did not seek a religious exemption. Citing its roots as a Catholic school in the Christian Brothers tradition, St. Mary’s president said the “decision to unionize or not rests entirely with our contingent faculty and is theirs alone to make.” The teachers voted 204-64 in favor of unionizing.

Which really begs the question: what’s wrong with St. Mary’s and those schools that don’t see the religious imperative to stopping unionization? After all, it’s not like Catholic social teachings support the right of workers to choose whether to organize, join a union, and bargain collectively; it’s not like denying the right to organize would be an attack on human dignity itself. Right?

Right… unless you’re going to read Catholic teachings on the subject. But no one’s doing that anymore, are they? If they did, they’d see that it says things like:

Catholic social teaching supports the right of workers to choose whether to organize, join a union, and bargain collectively, and to exercise these rights without reprisal.

No one may deny the right to organize without attacking human dignity itself. Therefore, we firmly oppose organized efforts, such as those regrettably now seen in this country, to break existing unions and prevent workers from organizing.

Still, kudos to those brilliant Catholic school administrators, who discovered the purest of all religious motivations: protecting the purse strings. Ka-ching!

January 19, 2016
If Your Biology Professors Believe in Adam and Eve, You're Not Getting a Proper Science Education
Next Post