An Atheist Explains Why a Secular Church Isn’t for Him January 19, 2016 Hemant Mehta

An Atheist Explains Why a Secular Church Isn’t for Him

The biggest asset for the Sunday Assembly is also its biggest downfall: It resembles a church in many ways. The organizers want all the benefits of worship — songs, sermons, community, ritual — without any of the religious nonsense.

As I’ve said many times before, it makes for a wonderful stepping stone for people who no longer believe in God but don’t want to ditch everything they love about church. For atheists who didn’t like church to begin with, though, it’s a hard sell.

There’s very little overlap, I suspect, between the crowd you’d find at some random atheist convention and the people you’d meet at a local Sunday Assembly gathering. That’s not a bad thing in any way — just an observation.

John Rael recently attended a Sunday Assembly meeting in his area, and he really enjoyed the lectures and music… but he has no plans to go back. He explains why in this video: 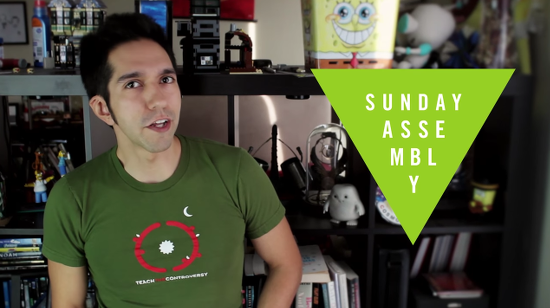 I don’t blame him one bit. The Sunday Assembly isn’t for everyone, but that’s not a bad thing. Many of the people who are drawn to that style of secular worship have never felt comfortable at other atheist gatherings. This is the first time they’ve enjoyed celebrating their non-theism. More power to them.

January 20, 2016 Try These Biblical Pick-Up Lines on Someone
Browse Our Archives
What Are Your Thoughts?leave a comment