In an almost-replay of a shocking story out of India last year, a group of Hindu activists went berserk on a train in Khirkiya station in Madhya Pradesh state a few days ago.

The reason for the group assault? A Muslim couple on the train was suspected of carrying beef.

The 80-percent-Hindu majority in India believes that cows are sacred animals and that eating beef is tantamount to blasphemy. So a gang of especially devout nannies attacked the Muslims to teach them a lesson.

The police said the couple was in a train when members of the Gauraksha Samiti seized a bag from them. The couple told the BBC that they were not carrying any bag containing beef. 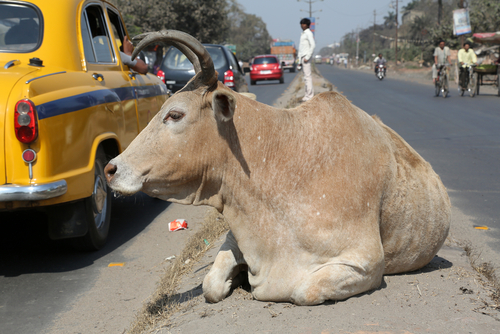 And if they had carried or consumed beef, how would that excuse anything?

Hemant summed it up back in September when discussing Mohammad Akhlaq, the Muslim man who was killed by an angry Hindu mob because they suspected Akhlaq was hoarding beef at home:

Even if Akhlaq had stored beef at home, why would it matter? It’s not like he was encouraging others to eat it. Ultimately, he wasn’t killed for having beef at home. He was killed for not being Hindu.

At least last week’s incident didn’t turn deadly. Not that it should matter when it comes to pursuing justice.

Senior police officers in Harda Rambabu Sharma told BBC Hindi that “seven people have been arrested and the railway police is investigating the matter.”

Surendra Singh Rajpurohit, a right-wing activist who formed the Gauraksha Commando Force a few years ago, has reportedly warned Harda Superintendent of Police Prembabu Sharma to be ready for a repeat of “September 2013”, when the town saw large-scale riots over cow-slaughter rumors. In a purported audio tape of the conversation, Rajpurohit alias Tiger, who is the main accused in the 2013 riots, has accused the police of partisan action against Hindus.

Oy. The classic pie-chart in which a 76% Christian majority in the U.S. claims it’s being oppressed could be easily altered to apply to India and its Hindu majority.

We should all consistently expose this victim mentality for the unseemly, irrational whining it is.