You know, if you want to win the support of evangelicals in an election, you should at least try to speak their language.

In his speech at Liberty University this morning, Donald Trump misquoted a Bible verse. Not the words in them, just the way he presented it: 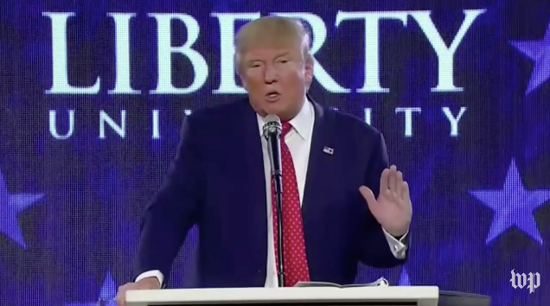 “We’re going to protect Christianity. I can say that. I don’t have to be politically correct,” he said. “Two Corinthians, 3:17, that’s the whole ballgame … is that the one you like?”

But the crowd tittered and several of the students audibly corrected him, pointing out that Christians say “second Corinthians,” not “two Corinthians.”

It’s as clear a sign as any that Trump doesn’t attend church or think much about the Bible. Normally, I would appreciate that. With Trump, though, it’s another sign that he’ll lie about anything, even his love of the Bible, if it means getting more votes.

It wasn’t the only way Trump screwed up at Liberty.

He boasted about breaking attendance records at the school… even though attendance at this convocation was mandatory for students.

He said how honored he was to be compared to the late Jerry Falwell — which may work at Liberty, but nowhere else, since Falwell was best known outside his Christian bubble for his bigotry.

Trump also pointed out that, “If I’m President, you’re gonna see ‘Merry Christmas’ in department stores, believe me.” As if he has any control over that. (He still doesn’t know what a President does, does he?)

Maybe most importantly, on Martin Luther King Day, Trump did what he does best: He talked about Trump. When he mentioned King, it was only to talk about how both of them drew large audiences. Because that’s what we remember about King: His great dream about speaking to a big audience.

Even when Trump praised Christianity, he had to praise himself in the process, saying “The Art of the Deal is second to the Bible.”

He was arrogant and ignorant at a school built on intolerance.

It’s a match made in hell.

January 18, 2016
Scientists Pat and Peter Shaw, Rejecting "Religious Do-Gooders," Ended Their Lives on Their Own Terms
Next Post

January 18, 2016 Hindu Posse Attacks Train Passengers For Possibly Carrying Beef
Browse Our Archives
What Are Your Thoughts?leave a comment