President Obama to YouTuber: I Educate Myself in a Manner “Consistent with the Scientific Method” January 17, 2016 Hemant Mehta

President Obama to YouTuber: I Educate Myself in a Manner “Consistent with the Scientific Method”

President Obama was interviewed by a few popular YouTubers the other day, and most of the media attention has been focused on his answers to a couple of obviously pressing questions.

If a dog wore pants, how would he wear them? (Like this.)

But lost in that shuffle was a genuinely interesting comment Obama made, in response to a question by Destin Sandlin, about how he informs himself and makes judgments when he’s not an expert in a particular area.

Asking God for divine guidance didn’t enter into his response, but science sure as hell did (18:55 mark): 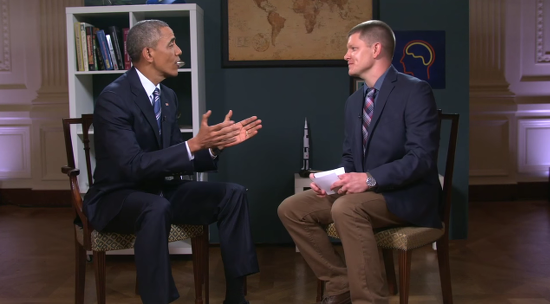 Well, it’s interesting. And this is consistent with the Scientific Method, right? Over years, you accumulate knowledge. And you test hypotheses and propositions. So how I think about it today is different than the first day I walked into the Oval Office. Now I’ve got enough of a baseline of knowledge. I’ve seen problems come up before. I’ve seen patterns that have emerged, that I may not have to go as into the briefing book as deeply as I did initially, so I’m skimming, and I’m looking at — are there significant differences?

But the most important thing that I find, whether it’s on the debt, defense, military side, whether it’s on social issues, domestic policy, is: I’ve learned to be pretty good at listening carefully to people who know a lot more than I do about a topic, and making sure that any dissenting voices are in the room at the same time, so that there’s an initial presentation, I will make sure that I hear from everybody in the room: “Does anybody disagree with the baseline facts?” “Is there any evidence that’s inconsistent with what was just said?” And if there is, then I want to hear that argument in front of me.

And what I’m pretty good at is then asking questions, poking, prodding, testing propositions, seeing if they hold up, and that, I think, is pretty consistent with how scientists approach problems generally.

That’s the sort of response you’d hope any President would give… and yet, for the life of me, I can’t imagine the current Republican frontrunners doing anything of the sort.

Donald Trump doesn’t surround himself with people who say no to him. Humility is not a word anyone would use to describe Ted Cruz. Who needs dissenting voices in the room when God already talks to you and tells you what to do?

Obama’s response is also a not-so-subtle rebuke to climate-deniers, anti-evolutionists, and revisionist historians who sadly take up far too many seats in Congress.

Maybe you dislike the President’s decisions, but it’s hard for me to think he’s making them on a whim without consulting people who might have a legitimate reason for disagreeing.

On a side note: Be sure to watch the 30:10 mark to see the President explain what he’d like the characteristics of “Obamium” to be if it were a newly discovered element.

January 17, 2016
Religion is Bad Enough, but This Makes It Even Worse
Next Post

January 17, 2016 That Viral Photo of a Christian Cross Sunrise Isn't Supernatural... It's Science!
Browse Our Archives
What Are Your Thoughts?leave a comment