Franklin Graham: Atheist Lawsuit Against “In God We Trust” on Money Spells Doom for the Nation January 17, 2016 Hemant Mehta

Franklin Graham: Atheist Lawsuit Against “In God We Trust” on Money Spells Doom for the Nation

Since Michael Newdow filed a lawsuit last week to remove “In God We Trust” on U.S. currency, Christian conservatives have been freaking out as if 1) this will actually work and 2) society would collapse if it did.

Franklin Graham is the latest to say the sky is falling: 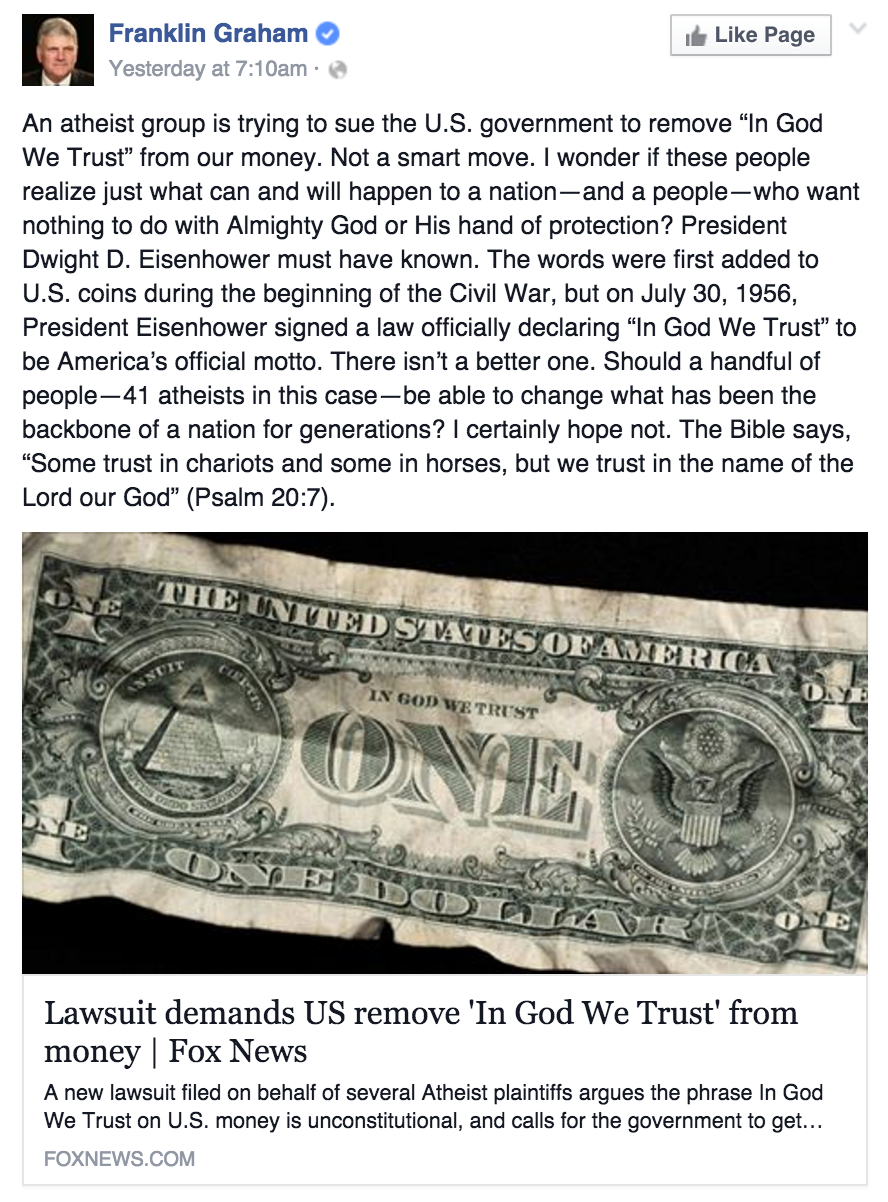 An atheist group is trying to sue the U.S. government to remove “In God We Trust” from our money. Not a smart move. I wonder if these people realize just what can and will happen to a nation — and a people — who want nothing to do with Almighty God or His hand of protection? President Dwight D. Eisenhower must have known. The words were first added to U.S. coins during the beginning of the Civil War, but on July 30, 1956, President Eisenhower signed a law officially declaring “In God We Trust” to be America’s official motto. There isn’t a better one. Should a handful of people — 41 atheists in this case — be able to change what has been the backbone of a nation for generations? I certainly hope not. The Bible says, “Some trust in chariots and some in horses, but we trust in the name of the Lord our God” (Psalm 20:7).

I don’t care that he wants the lawsuit to fail, but it’s absolutely ridiculous to think anything bad would happen to the nation if the phrase came off our money. Hell, if it were suddenly removed and not announced, I doubt most Christians would even notice.

If your faith — and our nation’s total awesomeness — is dependent on a handful of words stamped on money, both must be pretty damn flimsy.

But to answer Graham’s question, should a handful of people be able to change longstanding tradition? Yes. Absolutely. That’s how the law works (if those few people are found to make a compelling legal case), and that’s how bad traditions end.

If Graham doesn’t think 41 people should have the ability to overturn longstanding tradition because they believe it’s inappropriate, then I assume he’ll finally shut up about trying to overturn Roe v. Wade.

January 17, 2016
Forget the Advice on Cracked; These Atheist Arguments Can Genuinely Help People
Next Post