Republican Mike Huckabee Lashes Out Against Woman Who Asks Him About Josh Duggar January 16, 2016 Hemant Mehta

How do you infuriate Republican Presidential candidate Mike Huckabee without mentioning anyone in the Democratic Party?

Simple: Ask him why he defended the Duggar family after it was revealed that Josh Duggar had molested several of his younger sisters and his parents had covered it all up.

At the time, Huckabee called Josh Duggar’s actions “inexcusable” yet defended his parents’ decision to hide the information from public view — mostly because they, like him, are Christians. It was the sort of compassion he would never, ever offer if we were talking about a gay person doing anything even remotely close to what Josh Duggar did.

At a rally in Iowa this week, a citizen asked Huckabee about his dubious ethics in that situation, telling him, “It hurts my feelings that somebody like you [is] running for the American public.”

Huckabee responded by kicking the woman out of the rally. American Bridge 21st Century, a liberal super PAC, got it all on video: 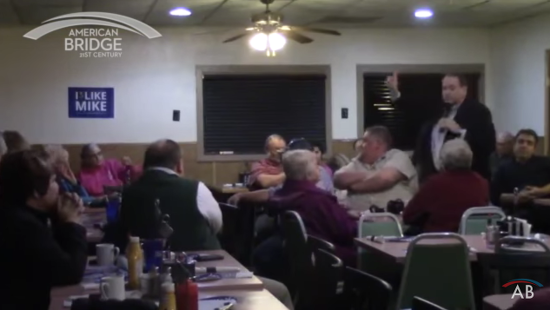 Maybe the worst part of Huckabee’s response was when he basically told the woman to shut up so he could tell her the media was just as culpable as Josh Duggar for how the situation was handled. He added:

… You read a tabloid. You read People magazine. You. Don’t. Know.

… You come in here to confront me, which is fine, but you cannot abuse, which is what you’re doing, the reputation of a Godly family who have been through hell… but I would support any family who tries to work through their problems under the grace of God.

And then he asked her to stop talking about the Duggars because she didn’t know them personally like he did.

Part of me respects that answer: We don’t know everything that goes on behind the scenes at Duggar Central. But when a family like that makes bank off the reputation that they’re a wholesome Christian family — and gets involved in local politics, encouraging people to vote against a non-discrimination ordinance because they claimed it would allow transgender people to sexually assault people — then their hypocritical actions deserve to be made public and criticized.

Huckabee himself has become nationally known for his rants against LGBT people. Does he “know” the people he’s criticizing? Of course not. But that’s never stopped him from claiming our society is worse off because LGBT people have equal rights.

This lady asked a fair question about Huckabee’s response to an awful situation and Huckabee responded by blaming everyone but himself.

If he can’t handle a question about the Duggars, he’s going to need a lot of work before he ever steps foot in the White House.

January 16, 2016 Pat Robertson Warns Teenager to Avoid Rock Music That "Summons Demons"
Browse Our Archives
What Are Your Thoughts?leave a comment