If I go a few days without posting about Pat Robertson, I wonder if something’s happened to him. But then he’ll say something crazy and all is right with the world again.

Robertson reminded his audience this week that listening to rock music is a sin because it can be used to summon demons. Obviously. 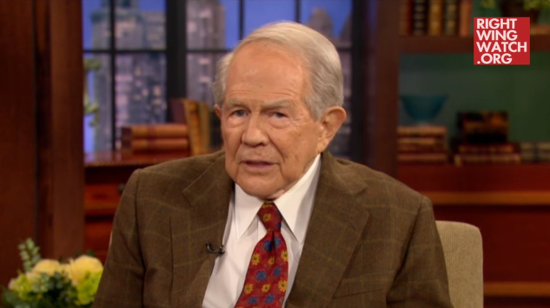 Robertson said this to a viewer who asked if it was okay to listen to rock music (in addition to Christian music):

It depends on what rock you’re listening to… Some of the stuff is just evil. They used to talk about killing your parents and there were just some evil things. There were odes to Satan. You don’t want that stuff coming into your mind.

There’s some beat that’s out there that, you know, probably isn’t all that bad, although in one Indian context, they were playing rock music, and the person said, “Why are you calling on the demons?,” because that was the kind of music they used to, you know, summon demons.

This can only mean two things: I’m listening to the wrong music. And Robertson’s still alive and ticking.

January 16, 2016
Republican Mike Huckabee Lashes Out Against Woman Who Asks Him About Josh Duggar
Next Post