Bill Maher and Ralph Reed Argue About Whether the Gospels Were Written by Eyewitnesses January 16, 2016 Hemant Mehta

During the “Overtime” (non-televised) segment of his show last night, Bill Maher got into a brief argument with Ralph Reed and Dr. Cornel West about whether or not the stories about Jesus were in fact stories.

It began with a discussion of whether the evangelical vote will still make a difference in the Iowa caucuses. But when Reed brought up how Jesus fed people with fish and bread, Maher laughed it off as fiction written by people who didn’t even live at the same time as Jesus.

Reed’s response? They were still “contemporaries.” And that began a brief but entertaining debate over how the Gospels weren’t written until about 40 years after Jesus died, by people who didn’t know Jesus personally: 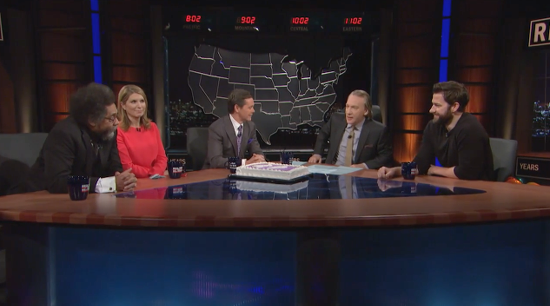 Reed: There are as many contemporaneous accounts of His ministry as there are of Aristotle’s life.

Reed: As I said, there are contemporary, eyewitness accounts. Whether or not they were written later or not doesn’t…

Maher (over Reed): There are no eyewitness accounts!

Reed: But it’s by the eyewitnesses who were there.

Reed (over Maher): Matthew wasn’t there?

Maher: Okay. But not a contemporary!

Reed: So you’re saying that if I write something 37 years from now which says I knew you and I saw you do this…

Reed: Well, then we have an issue with definition of terms.

Maher: Right! A contemporary is someone who lived at the same time!

On this point, Maher’s right. Eyewitnesses didn’t write the Gospels. The question is really whether the people who wrote them were passing along accurate stories from decades earlier. Religion, as we know, is a big game of telephone. Not only is there plenty of time for inaccuracies to develop, the writers have agendas of their own.

It’s surprising that Reed, the conservative Christian founder and chairman of the Faith & Freedom Coalition, didn’t know that.

Or maybe it’s not surprising. When you live in the bubble, you rarely allow yourself to hear information that might weaken your beliefs.

Maher isn’t a religious scholar. He’s not an expert in the field. But at least in this case, he knew what he was talking about.

January 16, 2016
A Documentary About the Psychology of Religious Belief
Next Post