Russian Pastafarian Told He’ll Lose His License if Cops Catch Him Without a Strainer on His Head January 15, 2016 Hemant Mehta

If government officials want to stop Pastafarians from wearing colanders in their driver’s license pictures, the Moscow State Traffic Inspectorate is creating a model for others to follow.

The group’s deputy head, Vladimir Kuzin, told newly-licensed Pastafarian Andrei Filin (seen below with a yellow knitted strainer on his head) that if he ever gets pulled over by a cop, and he’s not wearing that strainer, his license will be revoked. 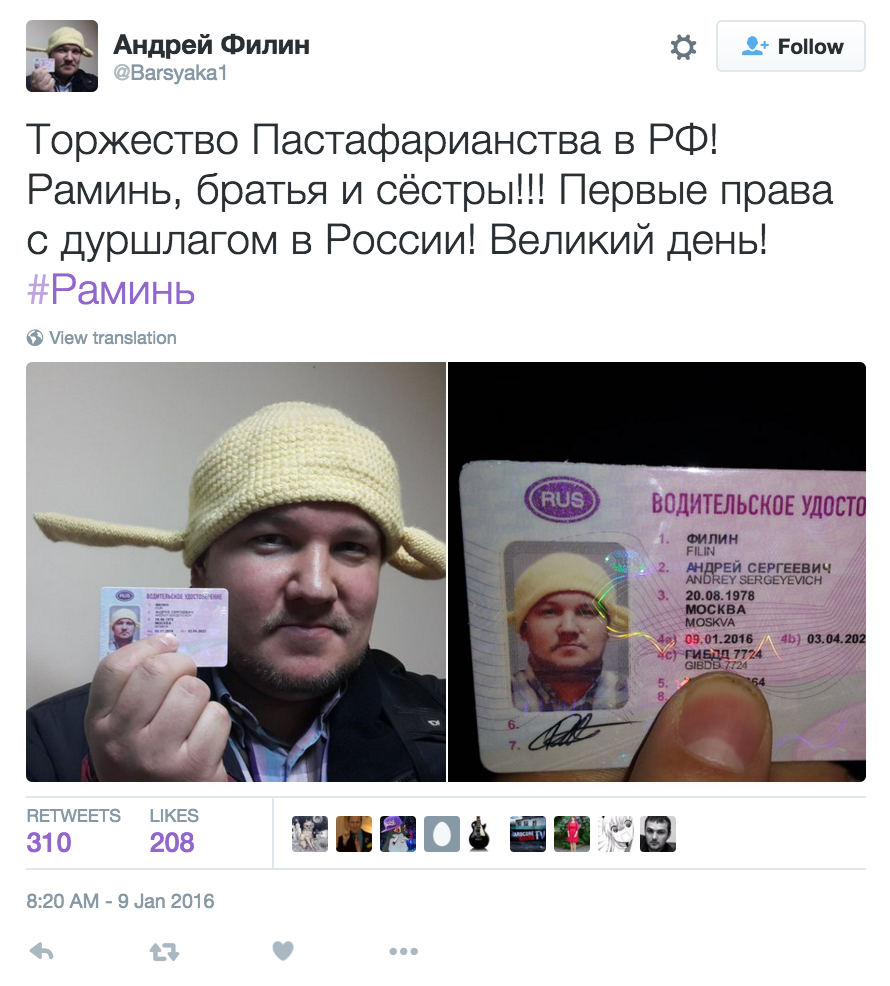 “The next time he is stopped by the traffic police, if he doesn’t have a pasta strainer on his head, his licence will be taken from him,” Mr Kuzin said.

In short, if Filin wants to make a mockery of the licensing process with his pseudo-religion, the government’s going to make him stick to it. Clever, right? It’s not like a Muslim woman wearing a hijab is only going to wear it for her license and then never again in public.

But there is a genuine problem with that sort of thinking.

This spur-of-the-moment rule basically says that whatever religion you have when you get your license is the religion you have to keep for the next several years (until the license expires). There’s no room for a genuine change of heart. The Moscow government is really forcing Filin to follow a particular religion under threat of revoking his license.

We’re all aware that people can change their minds about God at any age.

Kuzin may have felt he was outsmarting Filin, but he’s absolutely overstepping his authority by telling Filin which religion he must follow for the next several years.

Will their licenses be revoked, too? If not — and let’s all agree they shouldn’t be punished for changing their beliefs — then this is selective discrimination against Pastafarians. Even for a parody religion, the government has no right to implement this rule.

January 15, 2016
15-Year-Old Pakistani Boy Chops Off Own Hand to Prove He Really Loves God
Next Post