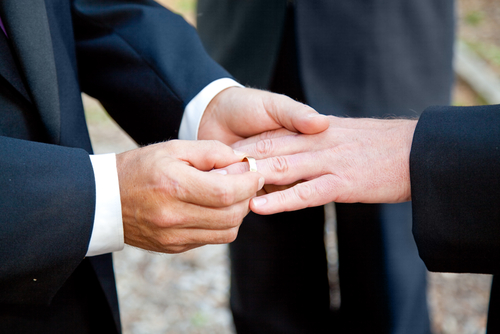 To outsiders, it wasn’t exactly a big deal. It was welcome, sure, but it was followed by pity applause rather than a standing ovation. Given that the Supreme Court, the Democratic Party, a handful of Republicans, and the majority of the American public already accepted marriage equality, Episcopalians were late to the party, not leading the way forward.

Episcopal leaders were like stragglers crossing the finish line of a marathon at the eight-hour mark. They did it and they certainly deserved credit for that — it was a huge personal accomplishment, after all — but the crowds had dissipated and everyone else was out celebrating without them. The only thing they really deserved credit for was entering and finishing the race, something evangelical Christians and Catholics never even bothered to do.

And it wasn’t even a full acceptance of gay marriage since priests were permitted to say no to officiating same-sex ceremonies.

For their tepid endorsement of marriage equality, though, they have been officially punished by the Anglican Communion to which they belong:

“Given the seriousness of these matters we formally acknowledge this distance by requiring that for a period of three years The Episcopal Church no longer represent us on ecumenical and interfaith bodies … ,” a statement issued by the Anglican Communion reads. “They will not take part in decision making on any issues pertaining to doctrine or polity.”

Meh. That amounts to nothing more than a three-year time-out given by referees overseeing a corrupt game. Yes, the Episcopal Church can’t take part in any decision-making… but the Communion wasn’t making the right decisions even with them at the table. It’s a symbolic punishment at best.

I have no doubt that, in time, the membership of the anti-gay religious groups will dwindle while the more liberal churches will see whatever growth there is to be had.

What’s sad is that, when it comes down to it, the Episcopal Church is being punished for treating gay and lesbian people with some decency. Meanwhile, the churches that continue to theologically punish people for their sexual orientation are still in the Anglican Communion’s good graces.

January 15, 2016
What Should Atheists Do With Their Bodies After They Die?
Next Post

January 15, 2016 In Defense of Charlie Hebdo's Alan Kurdi Cartoon
Browse Our Archives
What Are Your Thoughts?leave a comment