Here’s How My 5-Year-Old Daughter Discovered the Truth About Santa January 14, 2016 Hemant Mehta

It was supposed to be easy.

And during our first venture as parents, it was easy.

Soon after tossing our Jehovah’s Witness mindset into the trash, my wife Jennifer and I were faced with all manners of decisions about parenting. Of course, those decisions were present before, but we didn’t have to think about them because the Watchtower Society made all the decisions for us.

But in 2006, as newly minted non-religious people with a one-year-old child, we had to make some decisions without any help (read: coercion) from the Watchtower Society.

Among the biggies: How are we gonna handle Santa Claus? 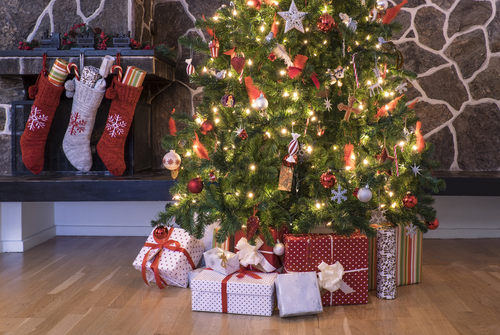 Since Witnesses are forbidden from celebrating Christmas, this had been an easy question before. Of course we wouldn’t pretend that Santa was real! Christmas was bad, and therefore Santa was bad, too! But now we weren’t Witnesses. That meant we had a chance to get to know my wife’s family better, since all of them celebrated the holiday — something that was important to me since I had lost contact with my own Witness family. So while the idea of celebrating Christmas seemed very appealing, the Santa aspect seemed… odd.

Okay, it seemed worse than “odd.” It seemed like a downright lie. In fact, despite protests from numerous parents I’ve spoken to over the years, none have cogently defined the difference between telling one’s children that Santa is real and telling them a lie. Having been lied to through religion over the past few decades understandably left us both weary of lying to our son, no matter how commonplace it was and harmless it seemed to others.

We decided that we would not do the “Santa” thing. If we bought a gift for our son, he could show his appreciation to us, not to some mythical figure. Whether our son has “been bad or good” would be, not the concern of some old man who lives on the Arctic ice, but our concern alone. Oh sure, a kids’ book about Santa or a Christmas decoration depicting jolly ol’ St. Nick would be just fine. But we intended to raise our son with the understanding that Santa was no different from, say, Mary Poppins or Pinocchio: A fun, magical story… but clearly fictitious.

And, like I said, round one was easy. Our son Owen, through no special effort on our part, lived firmly in reality. While still in preschool, he didn’t play pretend and he asked a lot of questions about astronomy and robots. When we sat down to read before bed, he only wanted non-fiction. Books about counting from 1 to 10 or books that showed A is for Apple and B is for Ball — he loved those. But books about green eggs and ham or anthropomorphic animals? Sorry: those were so fake Owen couldn’t even understand the appeal.

He was baffled that some of his peers believed in Santa. He couldn’t fathom the cognitive dissonance or — at least in his mind — the stupidity of five-year-olds who honestly thought that an obese geriatric somehow rode a flying reindeer-powered sleigh to every Christian household in a single evening.

But then we had another kid.

Our daughter Isla, five years younger than Owen, spent big chunks of each day off in a magical world where dolls shared tea with her and little action figures lived and breathed rich experiences that they never had with our son. Isla loved looking intently at the tales Owen had rolled his eyes at: Tinkerbell and Totoro and the little girl who wanted to build a snowman. Without us ever saying anything, Isla concluded these were real. She searched the yard every spring for fairies, occasionally mistaking mosquitos and dandelion seeds for the mythical creatures. “Mama,” she asked my wife one afternoon, “do you have magic?”

“No,” she honestly replied. “Do you?” Dejectedly, Isla confessed she did not have it, either.

Despite her predilection for fantasy or, actually, because of it, we continued our non-Santa policy. But here was the problem: We live in a society overwhelmed by the Santa mythos. Christmas songs celebrate him as real. Every Christmas movie that even tangentially references Santa acts as though he’s real. And after Christmas, adults would ask my kids, “What did Santa bring you this year?”

Owen would bluntly reply, “Nothing,” but Isla was just confused.

This presented a sticky situation. Because if any other children are within earshot, it’s just assumed that adults will maintain the Santa lie. We couldn’t ruin the fantasy for other kids without seeming like horrible people. So we just whispered to their parents quickly, before it became awkward, “we don’t do Santa Claus.” Most of the adults, it seemed, performed elaborate deceptions to keep the story going:

Why is there a Santa in every mall? Oh, those are just guys helping because the real Santa is too busy!

You’re gonna stay up until Santa comes? Nope, sorry, he sees you when you’re sleeping; he knows when you’re awake, so fall asleep for goodness sake!

Yes, Virginia, this is a culture where faith is touted as a virtue and critical thinking is stymied in favor of upholding the deception.

We had to tell Owen not to ruin it for other kids. Which, to us, was a bit like saying, “Don’t tell your friends that the earth is round, because their mommy and daddy want them to believe it’s flat.” Nonchalant as always, Owen was fine with this. When he was asked about it, he said he didn’t believe in Santa. When asked why, he cited the ridiculousness of the myth. But he didn’t go out of his way to spoil it.

He was, however, a little more open with his sister. During the winter when she was three, and again when she was four, they argued about Santa. Isla insisted he would be coming down our chimney to leave us presents, and Owen, firmly rooted in reality, would point out all the flaws in the story (e.g. our chimney is too small, none of the presents are ever labeled “from Santa,” and so on). Gradually, she seemed to accept his arguments, even if she didn’t fully embrace them.

That’s why Isla — so in love with the world of fiction — was a bit confused during her first Christmas season in elementary school. Her classmates believed in Santa, and it seemed like so much fun! Isla told them that Santa was just a story, only to hear in response, “You’re wrong!” She thought — hoped — that maybe she was.

Thankfully, earlier in the school year, Isla and her classmates had learned about conducting experiments. At home, they each performed a test where they hypothesized which of four food items would rot first, and then they set out samples of each item and waited as the days passed, observing and documenting the results, and freely admitting if their guesses were incorrect.

In what I consider a win, both for Isla’s schooling and upbringing, Isla then applied this scientific method to Santa Claus. She declared to her mother that she wanted to set out cookies for Santa this Christmas.

Jennifer asked, “Oh, you want to pretend Santa is real this year?” No, Isla corrected, she wanted to perform an experiment.

She and Jennifer baked a batch of cookies a few days before Christmas. We consumed most of the them during the week but purposely set aside four cookies for our potential visitor. Four delicious, irresistible confections that no overworked, heavy-set man could possibly refuse.

On Christmas Eve, Isla was sick. She spent the morning vomiting and the afternoon lying on the couch groaning with discomfort and moving in and out of sleep. My sympathy for her was at an all-time high. As nighttime approached, Jennifer set the four remaining cookies on a plate in our living room, about three feet from our Yuletide tree and seven feet from our chimney. Isla charged us all with the duty of not eating them. She also set on the plate a note she’d prepared for Santa — “To Santa / From Isla / I am 5” — lest he think the cookies were not for him to take. 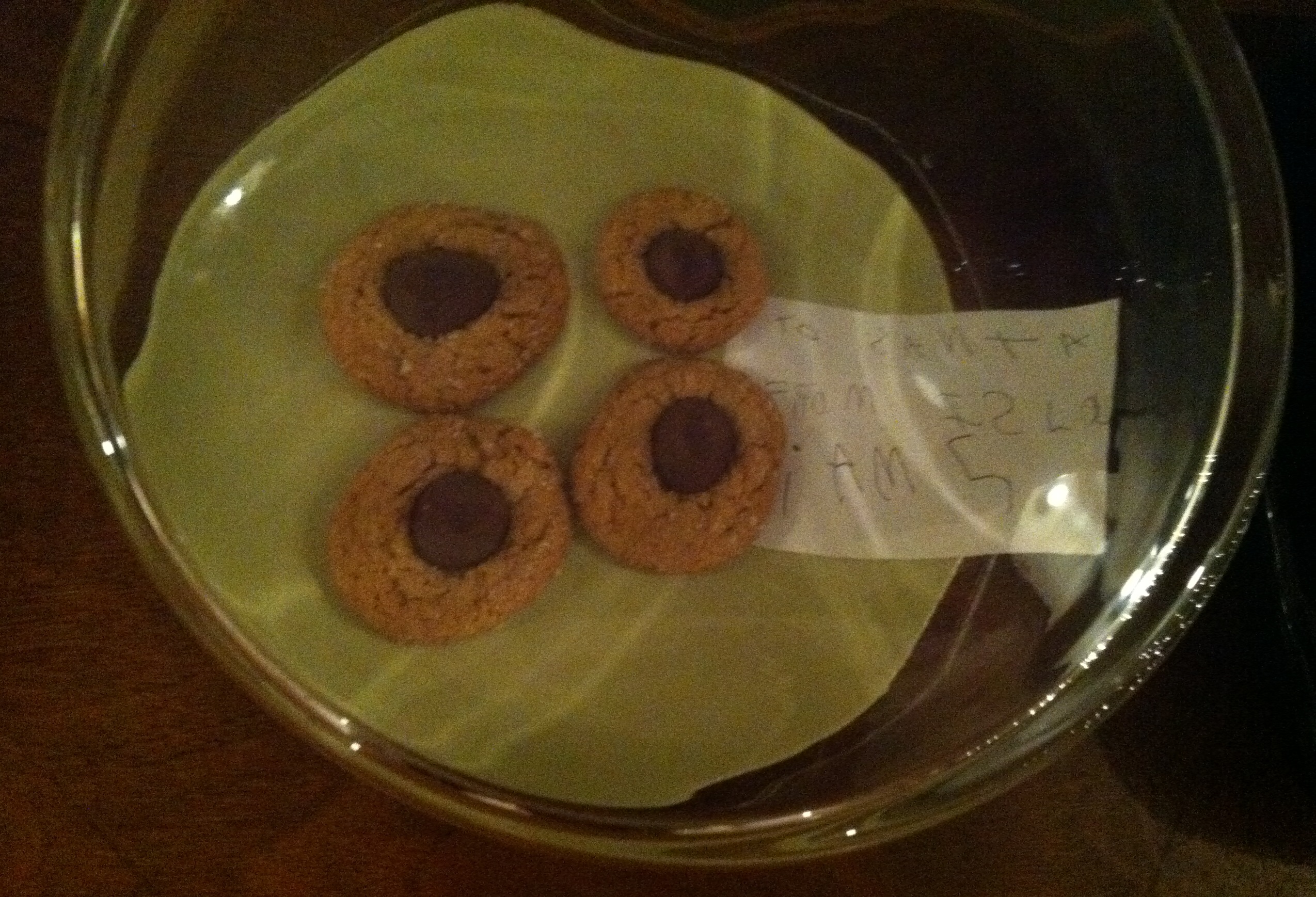 After my sick daughter went to bed, Jennifer and I were busy preparing for Christmas morning. I brought up the gifts from the basement, and Jennifer did some last-minute wrapping. We fixed the ornaments and the mantle so everything looked picturesque. In between all that, I kept walking past the cookie experiment. It was so cute. It was beyond cute. It was innocent and poignant and sweet and intelligent, all at the same time. “This is really giving me an ethical dilemma,” I said as I gestured to the plate. Jennifer said she was too busy and tired to get into it right now, but I persisted, saying I truly wasn’t sure what was the right thing to do.

I mean, on the one hand, Santa is fake. And if I ate the cookies, I would be participating in the mass collusion of parental delusion. Worse, I’d be lying. On the other hand, Isla’s friends believed in Santa, and it seemed like such fun! I saw the videos online of Santa surprising the kids with their dad returning from combat, and of Santa using sign language to talk with deaf kids, and it’s all so moving that I get choked up. How could I deny this cultural juggernaut? Certainly Isla, with her stomach flu and love of fantasy, could use a little magic right now.

After all, Isla had already indicated what she wanted: If Santa was real, he’d eat them. Jennifer and I finished preparing for the big day and then went to bed.

The next morning, the excitement of gifts and a lingering cold took precedence over the cookies. But, later in the morning, Jennifer said, “Isla, did you see your plate here?”

“Yes, I saw it right away in the morning.”

“What do you think?”

“What does that tell you?”

Her grin widened. “That Santa’s not real.”

She wasn’t upset; she was satisfied. Her smile indicated she was modestly reveling in the fact that her hypothesis had been confirmed. No more confusion among her peers. Sure, when school resumed, they would probably talk about all the wonderful things Santa gave them. But Isla knew the truth. She applied the same set of skills all five-year-olds should have toward a centuries-old fable, and she accepted the results like a good scientist.

January 14, 2016 Poll Finds That 0.0% of Young Icelanders Believe God Created the Universe Out of Nothing
Browse Our Archives
What Are Your Thoughts?leave a comment