Republicans can’t seem to figure out just how Christian President Obama should be.

When he doesn’t talk about his faith, they call him un-American or a secret Muslim. When he does, as he did when talking about the need for compassion for Syrian refugees coming into the country, he’s going too far. 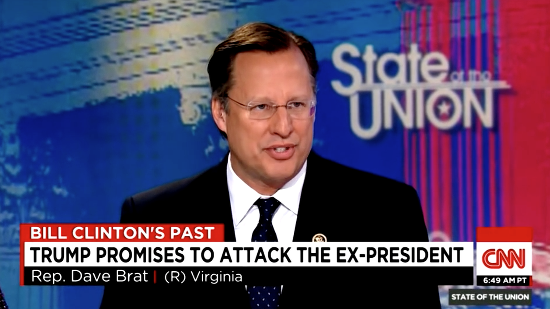 … [The President is] using the Christian tradition and he’s trying to bring about compassion by bonking Republicans over the head with the Bible. It’s almost a comedy routine on what compassion and love is. He’s mocking his enemies in order to compel a larger federal state using the tradition of love.

… Our side, the conservative side, needs to reeducate its people that we own the entire tradition [of Christianity]…

Congratulations, atheists! You’ve successfully pushed Christians out of the Democratic Party. At least I assume that’s what Brat means. If someone could let the Democrats know, that would be fantastic…

Brat’s version of Christian compassion means giving the finger to Syrians whose lives are in danger, because there’s a chance they may be terrorists.

(Image via YouTube. Thanks to Richard for the link)