A couple of years ago, President Obama(‘s staff) tweeted this line about the consensus on climate change: 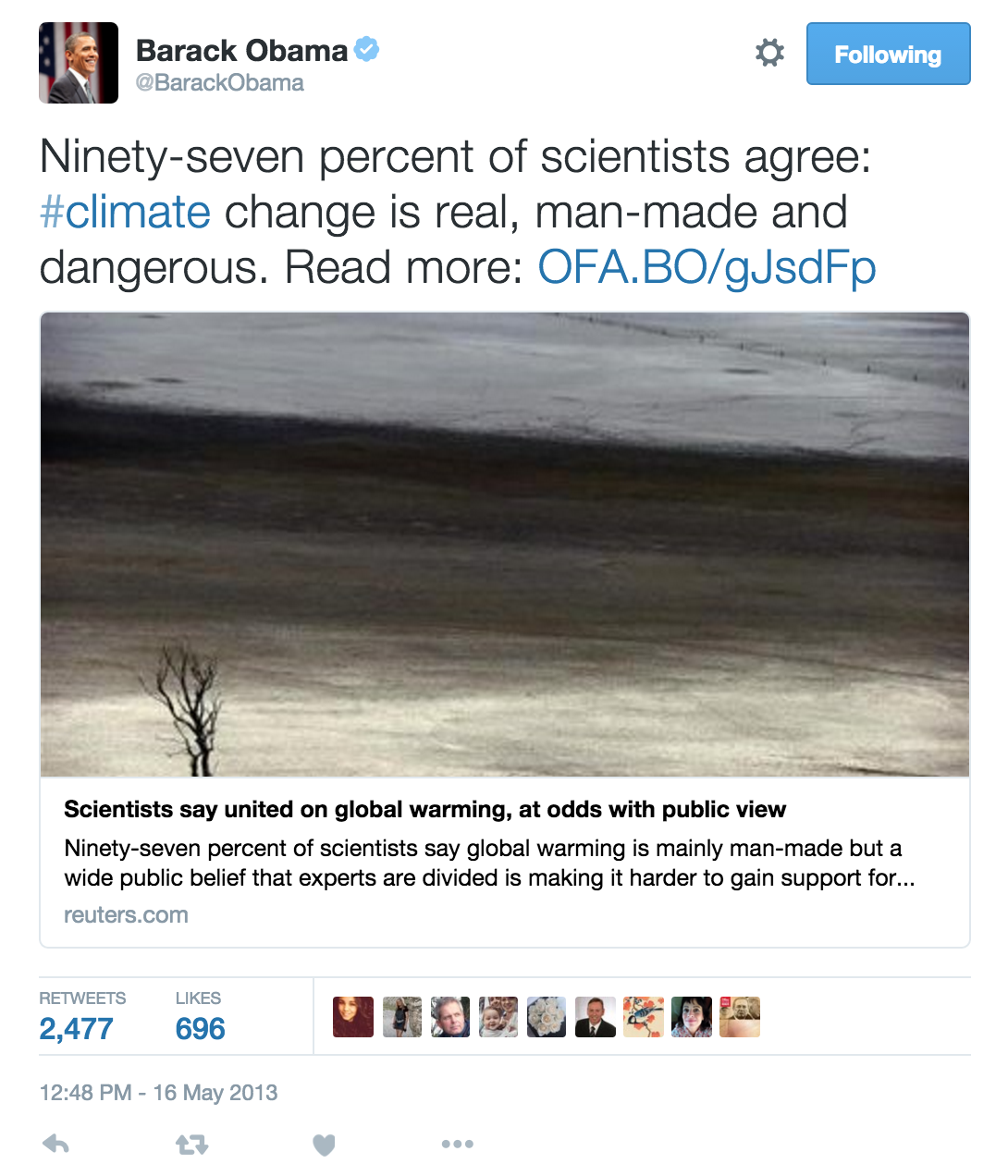 97% of scientists agree that climate change is “real, man-made and dangerous.” Strong, powerful words from the President. And right-wingers went nuts, trying to discredit it.

Turns out that number was indeed wrong… but in the other direction. It was actually an underestimate.

In an essay for Skeptical Inquirer, James Lawrence Powell, the executive director of the National Physical Science Consortium, shows just how far on the fringes climate deniers are:

… we scientists know that a small minority has often turned out to be right, otherwise there would have been no scientific revolutions. In the 1950s, for example, the percentage of American geologists who accepted continental drift was likely less than 3 percent. Yet they were right.

If there were a 3 percent minority on [anthropogenic global warming] it would matter, but there is not. The “97% consensus” is false. The percentage of publishing climate scientists who accept AGW is at least 99.9 percent and may verge on unanimity.

Powell explains that the paper where that 97% number came from ignored a lot of published papers that implicitly accepted climate change but didn’t flat out say it:

To count an article as part of the consensus, Cook et al. required that it “address or mention the cause of global warming.” Of the 11,944 articles that came up in their search, 7,970 — two thirds — did not. Cook et al. classified those articles as taking no position and thus ruled them out of the consensus.

He then ran his own calculations and pegged the actual percentage of published climate change scientists who accept that human activity contributes to global warming at an astonishing 99.9%. And even that’s lowballing it.

This result would allow the claim that 99.99 percent of scientists publishing today accept AGW. To be conservative, I prefer to say above 99.9 percent.

Excluding self-citations, only one of the five rejecting articles has been cited and that article only once.

So only a few published scientists, most of whom aren’t even credible enough to be cited by their peers, reject climate change. You can see that shortlist right here.

There are literally more Republicans in Congress who deny climate science than there are published scientists who feel the same way.

January 13, 2016
Upgrading the Meme About the Pastor Who Quit Attending Sports Events
Next Post

January 14, 2016 Nashville Bank Robber Accidentally Drops His Bible During the Getaway
Browse Our Archives
What Are Your Thoughts?leave a comment