After South Carolina Gov. Nikki Haley gave the Republican rebuttal to President Obama‘s State of the Union address this week, much of the media attention was on her indirect criticism of Donald Trump‘s hateful rhetoric. Most establishment Republicans loved that she called him out on it.

That’s not what Christian Right leader Bryan Fischer found objectionable about her speech.

Instead, he couldn’t stand a different line. It came when Haley was talking about what Republicans would do if they held the White House:

We would respect differences in modern families, but we would also insist on respect for religious liberty as a cornerstone of our democracy.

If you’re like me, you rolled your eyes at that line, because Republicans don’t respect a damn thing about gay couples. In the battle of civil rights versus bigotry, they opt for bigotry every time.

But Fischer was furious that Haley even bothered to give gay families lip service: 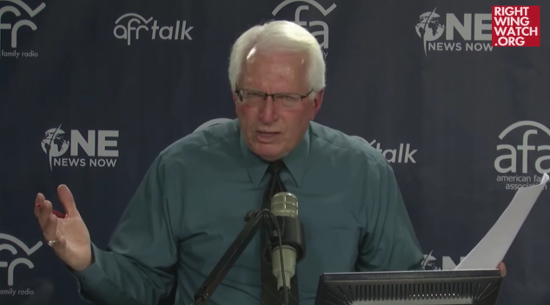 The party that believes the Supreme Court had no authority to strike down bans on marriage equality, that blocks anti-bullying legislation that would protect gay kids, that constantly opposes LGBT rights even now — that’s the party Fischer says has embraced “the entire homosexual agenda.”

All because Haley said she tolerated gay couples while in the same sentence giving a shout-out to people like Kim Davis and the bigot bakers.

Fischer, the Jesus-loving hate-monger, went on to say that “it’s a form of child abuse for a child to be raised in a same-sex household.”

And that, kids, is what the love of Jesus looks like in practice today.

January 14, 2016
Ben Carson: If We Give Equal Rights to "Abnormal" LGBT People, "Say Goodbye to America"
Next Post