Ben Carson: If We Give Equal Rights to “Abnormal” LGBT People, “Say Goodbye to America”

Over the weekend, Republican Presidential candidate and medical doctor Ben Carson went one step further to prove he’s no friend to LGBT people. On the contrary; he’s actively opposed to our existence, and he won’t even own up to it.

As part of a series of interviews with the presidential candidates hosted by Catholic network EWTN, Carson spoke to Matthew Franck, spewing one absurdity after another about why LGBT people are ruining America. 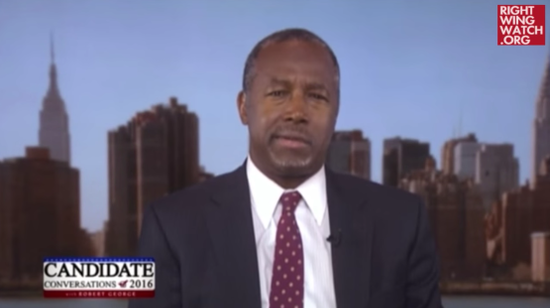 After making the usual incoherent arguments against marriage equality — which is legal and a done deal, in case anyone forgot — Carson tore into the idea of protecting transgender students in schools, calling pro-trans arguments “garbage.”

You see how silly this is. I mean, it’s beyond ridiculous that you take the most abnormal situation and then you make everyone else conform to it. That doesn’t make any sense whatsoever. That’s one of the very reasons that I have been an outspoken opponent of things like gay marriage. I don’t have any problem with gay people doing anything they want to do. You know, it’s a free country, there’s freedom of association.

However, when you now impose your value system on everybody else and change fundamental definitions and principles of society, I have a big problem with that. Everybody is equal, everybody has equal rights, but nobody gets extra rights. And when we start trying to impose the extra rights based on a few people who perhaps are abnormal, where does that lead?

Huh. I’m confused. How does a same-sex couple’s marriage impose anything on anyone else? Is Carson being forced to bless a same-sex marriage in order to maintain his citizenship? How is giving LGBT people a right already afforded to straight people considered “extra rights”? And how dare Carson say he has “no problem with gay people doing anything they want to do” when he won’t shut up about gay people who ask for nothing more than equal treatment under the law?

And even though LGBT people still face high levels of discrimination, including an epidemic of violence against trans women, regardless of marriage equality in the U.S., Carson holds firm that offering these Americans basic human rights would somehow be detrimental to the fabric of our great nation:

If we don’t stand up for principles now and we get a progressive and they get two or three Supreme Court picks, say goodbye to America.

I would love for the next Republican debate to include a question about the meaning of “principles.” Ben Carson is completely void of any understanding of equal rights, and these comments are so ridiculous, they border on performance art.

On that note, has everyone registered to vote?

January 14, 2016
Nashville Bank Robber Accidentally Drops His Bible During the Getaway
Next Post