A 17-year-old waiter in Kansas says that he was the recipient of a fake $20 tip — a proselytizing message, printed to look like a folded twenty-dollar bill.

Garrett Wayman posted pictures of the tip on his Twitter account, commenting “someone seriously left this as my tip today. pissed is an understatement.” 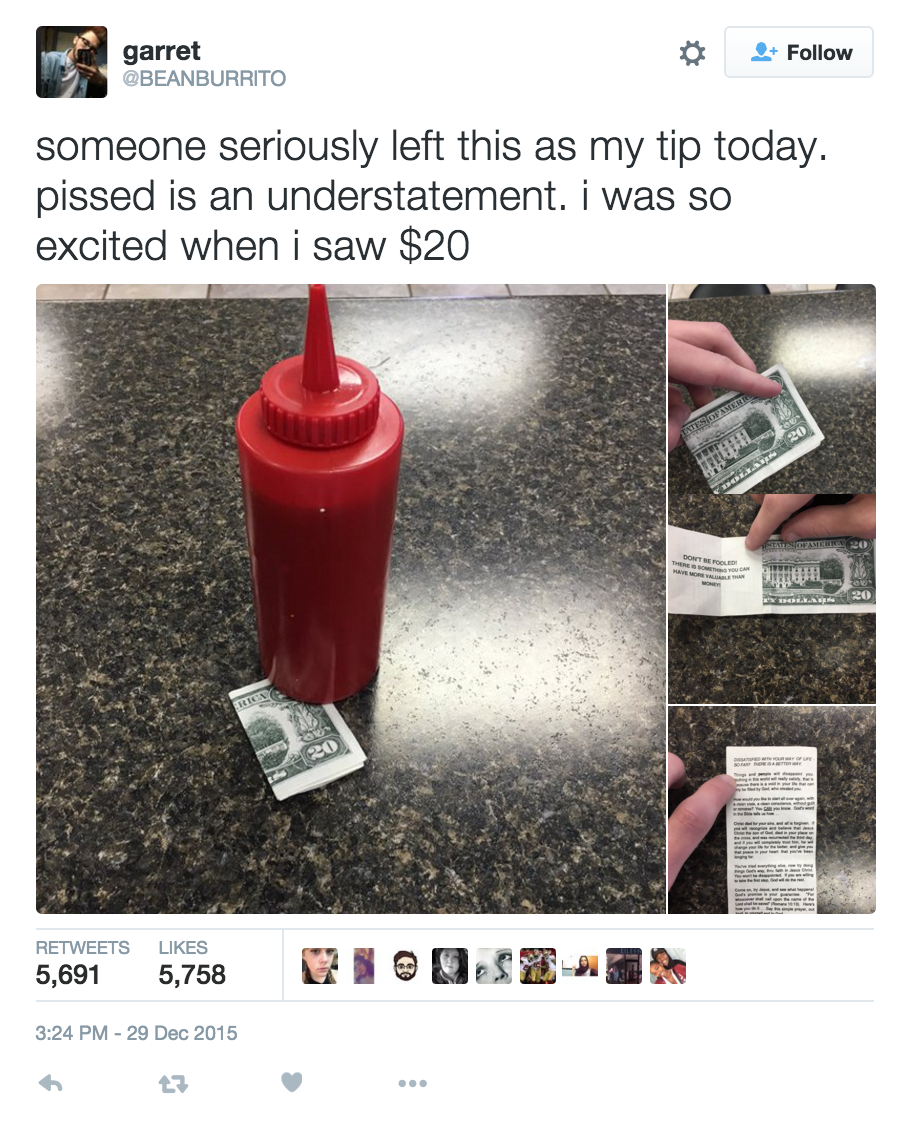 Wayman’s frustration is understandable, not least of all because the penny-pinching proselytizer didn’t even leave a real tip.

“He just left that,” Wayman told Tech Insider. “I wanted to tell him that I only make $3 an hour and bust my a– at my job to make way less than I deserve, but he was gone by the time I had the chance to.”

Wayman, who says he doesn’t even take weekends off as he works to pay off the $7,000 owed on his car, was excited because he had never seen a tip of that size left in the restaurant.

What’s less understandable is what this mealtime missionary might have hoped to accomplish with his make-believe-money. How can someone imagine that tricking people into thinking they’ve earned a nice tip is a good way to promote Jesus? Particularly if you actually leave nothing at all in the process.

THERE IS SOMETHING YOU CAN HAVE MORE VALUABLE THAN MONEY!

DISSATISFIED WITH YOUR WAY OF LIFE — SO FAR? THERE IS A BETTER WAY.

Things and people will disappoint you. Nothing in this world will really satisfy, that is because there is a void in your life that can only be filled by God, who created you.

Though Tech Insider can’t confirm Wayman’s story, tales of servers receiving fake money aren’t new. Previously, a waiter posted a picture of a tip he said he received to Reddit that turned out to be fake $10 with similar religious messages on the back. Another waitress also posted a picture of the same fake money on Reddit.

If that sounds logical, well, you probably believe the stories in the Bible.

January 13, 2016
When It Comes to The Satanic Temple, Christians Seem to Love Bearing False Witness
Next Post

January 13, 2016 Christian Preacher: I Moved Clouds and Stopped a Typhoon Because "I Have Authority Over the Weather"
Browse Our Archives
What Are Your Thoughts?leave a comment