If you’ve ever been out drinking with friends, there’s a chance you may have played “Never Have I Ever.” Someone makes a statement like, “Never have I ever… gone skinny-dipping,” and anyone who has done that takes a shot.

It turns out there’s a non-drinking version of that game available online. It’s called “Never Have I Ever: The Game of Poor Life Decisions.” If you look on Amazon, some of the sample cards offered up by the company say “Never have I ever… dated my sibling’s ex” and “Never have I ever… shown up to Thanksgiving high.” Harmless fun, right?

Reader Amber played the game over the holidays and was shocked to see these cards in the mix: 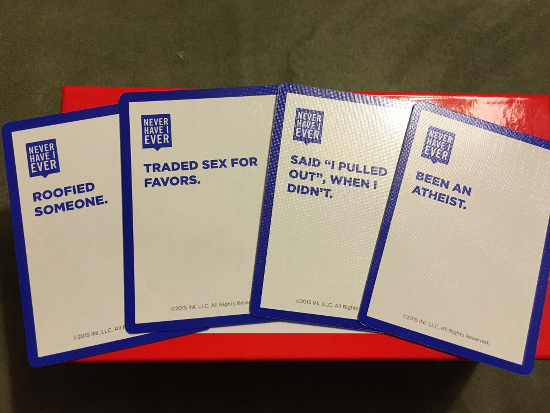 What sort of fucked up game is this…?

Who’s drugged someone else’s drink? Who didn’t pull out? I know you can just answer “no,” but the game only works if some people are saying “yes” to some of the cards. If they’re going down this path, why not just have a card that says “Never have I ever… raped someone”? Or “Never have I ever… set someone’s house on fire”? It’s just disgusting that this is what they think makes for a fun party game. As to the criminal nature of some of the cards, I’ll let others address that issue.

Just keep in mind that the description of the game says, “Don’t worry, what may have seemed like a terrible idea at the time now earns you points and makes you a winner.”

That last one, though, bothers me for a very different reason. If this is a game in which the cards list “poor life decisions,” I have a hard time understanding why being an atheist is on there. What exactly is the “poor” part of that decision?

As far as I know, there’s no card in the box that says “Never have I ever… been a Jew.” Nor should there be. So why is anti-atheist bigotry acceptable? Who approved that decision?

I reached out to the company, Ideas Never Implemented, for comment last night. I received a response from CEO/Founder Jay Vohra this morning, and it’s clear he doesn’t get why this is a problem:

I’m sorry if this card offends you, this was not our intent. From our research — Atheism is not a disbelief in gods or a denial of gods; it is a lack of belief in gods. Older dictionaries define atheism as “a belief that there is no God.” — so if you do not believe in god or gods then that is your personal opinion — there is no right or wrong answer in this game and what you are guilty of or not guilty of will not be the same for the person next to you.

Whoa! That’s what an atheist is?! I had no idea, you guys. Glad Vohra could set me straight by repeating something his researchers pulled out of a dictionary. (I guess the researchers saw the definition of “roofied” and gave each other high fives.)

Incidentally, the company’s website boasts that the game is available at places like Target and Barnes & Noble. If you feel the way I do, feel free to use those links to voice your concerns.

January 12, 2016
How Salon Ruined a Writer's Article by Making It More Antagonistic Toward the New Atheists
Next Post