David Bowie, Dead at 69, Was “Almost an Atheist”

David Bowie has died following an 18-month battle with cancer.

The news comes only two days after his 69th birthday and the release of his latest album, Blackstar. 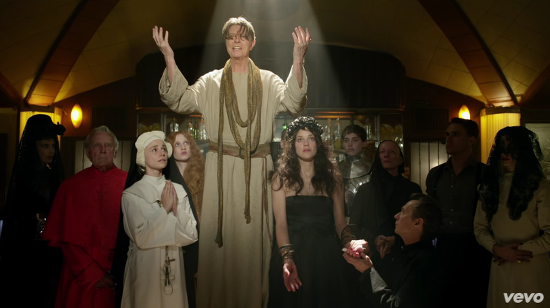 The announcement was made on the evening of his death, January 10th:

David Bowie died peacefully today surrounded by his family after a courageous 18-month battle with cancer. While many of you will share in the loss, we ask that you respect the family’s privacy during their time of grief.

Being a big David Bowie fan myself (I may have hung out around his NYC condo a few times, hoping for an opportunity to faint in his arms), I’m not surprised he kept his cancer private — like much of his life. Being an overly curious person about people’s religious views, I was always frustrated his belief in God(s) was another area he didn’t open up about much.

But occasionally there’d be a glimpse.

In a 2003 interview with Beliefnet.com, Bowie explained the significance of the title of his then-new album, Reality.

Bowie: It is ironic. You haven’t seen the artwork yet, but there’s a fakeness to the cover that undermines that. It’s the old chestnut: What is real and what isn’t? It’s actually about who’s stolen this world.

Interviewer: Do you feel like your thinking about those questions has changed or deepened?

Bowie: I honestly believe that my initial questions haven’t changed at all. There are far fewer of them these days, but they’re really important. Questioning my spiritual life has always been germane to what I was writing. Always. It’s because I’m not quite an atheist and it worries me. There’s that little bit that holds on: “Well, I’m almost an atheist. Give me a couple of months.” [Laughs]

God(less)speed, Starman. It’s too bad you didn’t live to see if there’s life on Mars.

January 11, 2016 I Wouldn't Take the Pamphlet from Him, Either
Browse Our Archives
What Are Your Thoughts?leave a comment