Sen. Ted Cruz Responds to the Question: Why Should Atheists Vote for You? January 9, 2016 Hemant Mehta

Sen. Ted Cruz Responds to the Question: Why Should Atheists Vote for You?

That may seem silly given the religious conservatism of the Republican field, but it’s an important question.

His most recent exchange was with Sen. Ted Cruz. Justin told me he asked his question right after Cruz “worked the crowd into a frenzy with some anti-Obama, anti-Hillary, pro-gun, pro-God rhetoric.”

The crowd went silent when he began his question with, “I’m an atheist…”

So how did Cruz respond? Why should atheists vote for him? See for yourself: 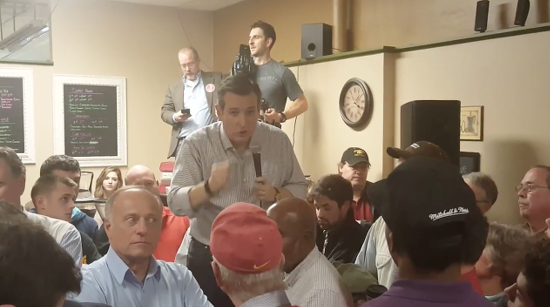 Besides Cruz saying he hopes Justin converts, which is a strange aside at a campaign rally, his response was what you’d expect: Cruz doesn’t really have a good reason for why atheists should vote for him, but he says he’d defend our rights in accordance with the Constitution.

Saying we have the right to believe as we choose was never in doubt, though (even with today’s Republicans). What are we supposed to do? Thank Ted Cruz for tolerating our existence?

So not that you were rushing to support him, but Cruz doesn’t want your vote. He’s here to advance his conservative Christian agenda. Everyone else should just be satisfied that he’s not looking to criminalize thoughtcrime, I suppose.

Be sure to read about Justin’s other exchanges with Sen. Bernie Sanders, Sen. Rick Santorum, and Governor Chris Christie.

January 9, 2016
Mark Zuckerberg, in Five Words, Reminds Us of the Importance of Vaccines
Next Post

January 9, 2016 Business As Usual: MSNBC and the New York Times Censor the Latest Charlie Hebdo Cover
Browse Our Archives
What Are Your Thoughts?leave a comment