Sen. Bernie Sanders: Merging Church and State “Is Not What Our Founding Fathers Wanted”

During an event with Sen. Bernie Sanders yesterday, Justin asked him for his thoughts on politicians who “base a lot of their legislation on their religious beliefs.”

Sanders, who was under the weather, expressed his support for church/state separation (as you’d expect): 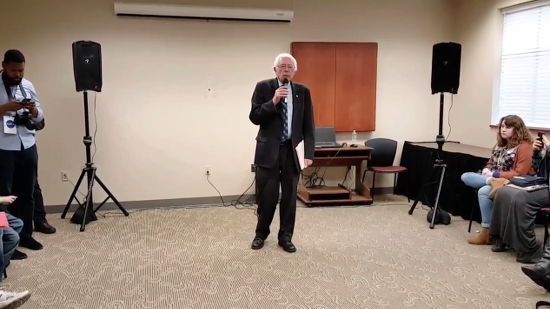 Religious freedom in this country is part of our Constitution, and all of us agree with that. And you have many different religions, and people have the right, in this country, to practice the religion that they believe in.

But we also have a separation between religion and state. We know how dangerous it is, historically, for governments to get deeply involved with religion… Let’s not confuse and merge religion and state. That is not what our Founding Fathers wanted, and they were right.

Somewhere, Christian pseudo-historian David Barton is making up a Founding Father quotation to rebut that.

Be sure to read about Justin’s other exchanges with Sen. Rick Santorum, Governor Chris Christie, and Sen. Ted Cruz.

January 9, 2016
Tennessee Christians Thank God for Taking the Wheel and Crashing Into a Pole at 85 m.p.h.
Next Post

January 9, 2016 Muslim Man Shoots Cop in Philly, As "Police Bend Laws That Are Contrary to the Qur'an”
Browse Our Archives
What Are Your Thoughts?leave a comment