A couple of days ago, he shared with Mike Huckabee his concern about an eroding wall between church and state, and then asked why atheists should vote for him, especially given the things Huckabee has said about us. 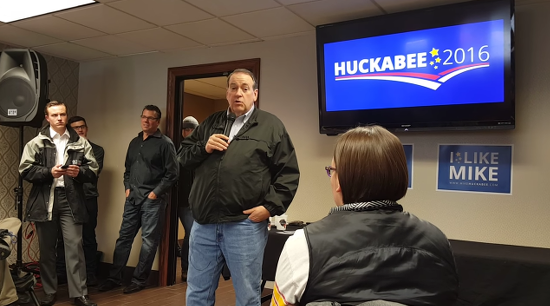 At the very beginning of his response, Huckabee says he can’t recall saying anything disparaging about atheists, so let me help jog his memory. It’s not that he’s ever called atheists names; it’s that he frequently links God with goodness, perpetuating the idea that atheists can’t be moral or ethical.

He once said atheists in government positions ought to be fired — or voted out of office, if we’re being generous about his meaning — as if Godless people can’t possibly bring positive values to the table. He once wrote: “If integrity and character are divorced from God, they don’t make sense.” Which is a clever way to suggest atheists can’t have either of those qualities while simultaneously allowing him to say “Sure, atheists can be good people; they just have no standard for goodness.”

You get the idea. And then, of course, there are the objectively untrue, horrible things he’s said about LGBT people.

Huckabee went on to say he defends our right to believe as we choose. (Which was always a given, so he wins no brownie points for that.)

When talking about church/state separation, Justin said he didn’t believe public schools ought to be promoting religion. Huckabee’s response was to ask Justin whether he thought schools should be “religiously secular” or “anti-religious” — as if those were the only alternatives.

No one wants that either. Promoting the sound science of evolution and teaching comprehensive sex education, for example, isn’t the same as advocating atheism. But Huckabee sees Christian persecution where the rest of us see neutrality.

Then, to make his point, Huckabee brought up the story of how an elementary school in Frisco, Texas once “forbid students” from wearing “the colors red and green together during the month of December” because it would remind students of Christmas, which would remind them of Jesus. That, said Huckabee, was going too far!

If that story were true… then, yes, I’d agree. But this is Mike Huckabee. He believes anything you tell him as long as Jesus appears in the story.

That elementary school story originated in the mind of Todd Starnes, Fox News’ chief liar-in-residence. The District never, ever banned those colors. In fact, the school had Christmas trees, staffers wore Santa hats, and students were allowed to wear whatever color combinations they wanted. But the rumor spread before the District could correct the misinformation.

He also said he simply wanted to make sure people weren’t “criminalized for their Christian beliefs,” which is a form of persecution that exists only in his head. Huckabee used Kim Davis as an example of this, but Davis was punished because she was a government employee who used religion as an excuse to not do her job. She wasn’t punished for being a Christian. She was punished for blocking citizens from obtaining the marriage licenses they were legally entitled to.

No Christian has ever been put in jail for believing in Jesus. If it happened, I promise you church/state separation groups across the country (not to mention a hell of a lot of atheists) would defend that Christian.

Huckabee later said he could indeed vote for an atheist who was honest about his beliefs, assuming they shared other values/politics/etc. (thought he couldn’t remember Rep. Pete Stark‘s name).

We didn’t necessarily learn anything new, but I love seeing Huckabee questioned by an atheist instead of his usual Christian base.

Be sure to read about Justin’s other exchanges with Sen. Rick Santorum, Gov. Chris Christie, Sen. Ted Cruz, and Sen. Bernie Sanders.

January 9, 2016
Muslim Man Shoots Cop in Philly, As "Police Bend Laws That Are Contrary to the Qur'an”
Next Post