On the one-year anniversary of the Islamist bloodbath at Charlie Hebdo, the New York Times deemed the weekly’s commemorative and irreverent cover newsworthy, but declined to show it — or even to explain it properly.

The cover shows a bearded figure in a blood-stained robe and carrying a machine gun, and the words “One Year After: The Assassin Is on the Run.”

That description is technically correct. But of course, as we shouldn’t need to point out again, the “bearded figure” is no mystery man: it’s Charlie‘s depiction of God. Without that clarification, and without a picture of the cartoon in question, the Times story makes zero sense. 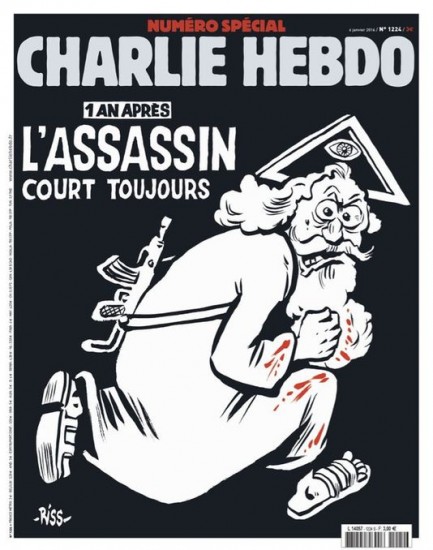 The yellow-bellied nature of this deliberate obfuscation should come as no surprise: the progressive-to-a-fault newspaper pulled the same shit with the very first post-massacre Charlie cover, deciding to write about it as the newsy event it clearly was, but stopping short of showing the relatively innocuous drawing on the grounds that Muslims might be offended.

The God on the latest Charlie cover doesn’t even seem to be particularly Muhammadesque, so the New York Times editorial staff has just created a special new level of weaselry (disclosure: I wrote for the paper frequently in the early 2000s).

As you might expect given the track record of Western media on this front, the Times doesn’t stand alone in its display of timidity. We can also point and laugh at MSNBC:

An MSNBC rep told the [Washington Post’s] Erik Wemple Blog today that the network, consistent with last year’s approach, isn’t showing images of the cover. Then we pointed out that Mediaite’s Alex Griswold had snared a screengrab of MSNBC indeed showing the cover.

In a reply that merits no further commentary from this blog, the MSNBC rep says that the network showed the current Charlie Hebdo cover up until it confirmed that the image was of God. “Once we found that out, we stopped showing it,” notes the rep.

It’s fair to say that whoever wrote and edited that MSNBC story is both remarkably dim — for not even understanding a cartoon that any smart 10-year-old would get — as well as cowardly for belatedly disappearing the illustration without even the slightest acknowledgment or explanation.

For me, there’s only one plus side to this phenomenon. When supposedly world-class news media shrug off their responsibility to fully cover current events for no other discernible reason than that tender-toed religionists might get offended, I’m happy that I left “professional” journalism years ago.

January 9, 2016
Sen. Ted Cruz Responds to the Question: Why Should Atheists Vote for You?
Next Post