What Does the Bible Say About Abortion? January 8, 2016 Hemant Mehta

What Does the Bible Say About Abortion?

We know what religious leaders claim the Bible says about sex. But what does the book actually say? More importantly, what does it leave out?

Theologian Matthew O’Neil has written a book discussing what the Bible says about everything from birth control to homosexuality to circumcision. It’s called What the Bible Really Does (and Doesn’t Say) about Sex: The How, When, Why, and With Whom of Scriptural Prohibitions and Permissions (Pitchstone Publishing, 2015): 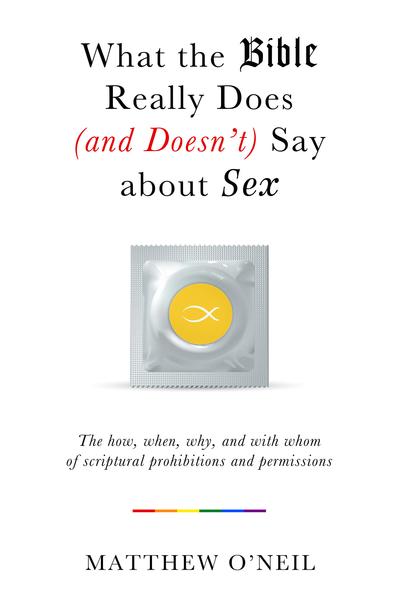 In the excerpt below, which is reprinted without footnotes, O’Neil tackles the question: What does the Bible say about abortion?

Nothing. This is not an oversimplification. The Bible says absolutely nothing on the practice of abortion. And this is not a means of glossing over sections, ignoring particular passages, using hermeneutics to understand passages in a different light, or employing any other theological filter. The Bible says not a single thing on the practice of abortion, even though it was practiced in the ancient world. From where, then, do so-called biblical arguments against abortion come from?

The obvious place to start is in the Decalogue, which states, at Exodus 20:13, “You shall not murder.” Note, the prohibition is against murdering and not killing. Specifically, the Hebrew word used in this commandment is rsh, meaning “murder,” and not mwt, meaning “kill.” These two words are often conflated, but there is a clear distinction between them. So, if we are to demonstrate that abortion is in direct opposition to this commandment, we first would need to show that abortion represents the murder of a child.

But what does it mean to murder? The legal definition of murder, as would be defined in a legal proceeding against an individual tried for such a crime, is “the killing of a human being… with intent, malice aforethought… and with no legal excuse or authority.”

The first part of this definition raises a number of important questions of its own — some philosophical, some rather black and white. Specifically, what does it mean to be a human being? This goes back to viability. We can argue that a fetus is a potential human being, but until it reaches a point in utero where it is capable of survival outside the mother’s body, it is, from a legal standpoint, not considered a human being. Seeing that 90 percent of abortions take place during the first trimester, or the first twelve weeks, of pregnancy, then by extension the vast majority of abortions cannot be considered or defined as murder.

Looking at the second part of the definition of murder, can we say that a woman has an abortion with malice? That may be hard to determine in individual cases, but — based on the available evidence — there is generally a great sense of relief after the procedure, and maybe a sense of anxiety prior to the procedure. No reputable study suggests malice is ever part of the equation.

Abortion is of course legal in the United States and does not fit under the legal definition of murder. Indeed, the United States currently permits abortion to save a woman’s life and to preserve her physical health, and for cases of rape or incest, for reasons related to fetal impairments, for economic or social reasons, and even, yes, for simple “on-request” reasons. The U.S. government even provides direct support for family planning. Given this context, it is incorrect to argue that abortion is murder, or is in opposition to the Decalogue.

What other possible biblical cues against abortion might there be? Exodus 21:22–25 describes a law relating to miscarriage caused in a discrete circumstance. Specifically, if a pregnant woman is inadvertently hit in the stomach by a man having an altercation with her husband and has a miscarriage, the offender has to pay the husband what he, and “the judges,” determine is owed to him. This law, however, does not infer a biblical objection to abortion, as this passage describes an action by a third party that unintentionally results in miscarriage. More so, the law does not clarify if the penalty is for harm to the woman or for the miscarriage, but it does offer a large clue toward the biblical view of fetal death. Indeed, the passage that follows reference to the death of the fetus states,“and there is no harm…” The implication is obvious: causing the death of a fetus was not considered a serious offense.

Other ancient laws provide a bit of context. Paralleling the Exodus passage, the Code of Hammurapi has a similar law, where ten shekels of silver are paid for the fetus. Contrast that with the punishment if the woman dies in the altercation: the daughter of the offender is to be killed. A Hittite law, outlining similar circumstances, demands monetary compensation based on the father’s input. A Middle Assyrian law holds that, if the wife miscarries, the offender has to give the victim a child from his own household. Even worse, should the father not have any sons, and the mother miscarries, the offender is executed.

A biblical passage that actually expresses a wish for abortion is Jeremiah 20:14–18. Here, Jeremiah bemoans, “Cursed be the day on which I was born!The day when my mother bore me, let it not be blessed… because he did not kill me in the womb; so my mother would have been my grave.” Reflecting on our discussion about the Decalogue, Jeremiah uses the word mwt, or “kill” — and not rsh, or “murder.” Further, the dramatics of the passage suggest that life does not truly begin until birth, which stands in contrast to Jeremiah 1:5: “Before I formed you in the womb I knew you, and before you were born I consecrated you.” While these passages suggest beliefs about when life begins, they relate to communication to and by one person: Jeremiah. Unlike other biblical passages that more explicitly relate to the moment life begins, such as in Genesis, as we will see, there is no context here that universalizes these passages to all of humanity.

For other instances related to the killing, or murder, of a fetus, we can look elsewhere in the Bible. In the Book of Job 3:16, Job says,“Oh why was I not buried like a stillborn child, like an infant that never sees the light?”The Hebrew word used for “stillborn” is nepel, which does not refer to a “killed” or “murdered” fetus. A similar example is at Ecclesiastes 4:1–3, which speaks of praises for “the dead, who have already died, more fortunate than the living, who are still alive; but better than both is the one who has not yet been, and has not seen the evil deeds that are done under the sun.”

Now, just to be clear, what can we learn of the breath of life from these accounts? Well, according to Genesis, if we look at the creation story with Adam, or adamah, which is Hebrew for “dust” (adam is Hebrew for “man” or “humanity”), we see God’s breath — the breath of life — animating the dust, making it a living being. By extension, we can conclude that all, humanity, all the flesh of the earth, and everything on dry land needed “the breath of life” to become alive. Thus, if we take a literal reading of the Bible, abortion could not possibly equate to murder, or killing of any kind, as the potential for life has not yet become life.

What the Bible Really Does (and Doesn’t Say) about Sex is now available online and in bookstores.

January 8, 2016 Italian Official Compares Surrogate Parents To Sex Offenders
Browse Our Archives
What Are Your Thoughts?leave a comment