Well, this is a new one.

Angelino Alfano, the interior minister of Italy, had an incendiary reaction to a proposal that would allow people in same-sex relationships as well as unmarried heterosexual couples to adopt their partner’s child. He essentially called for stepchild adoption to be banned nationwide and equated surrogacy to a sex crime. 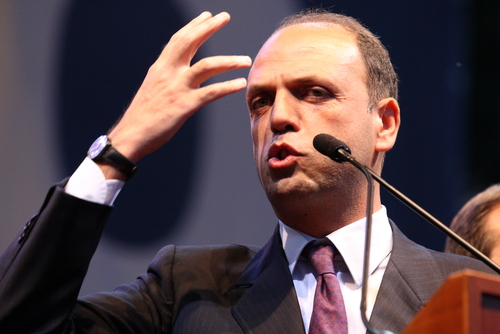 “We want wombs-for-rent to become a universal crime, which is punished with a jail term. Just as happens for sex crimes,” he added.

Italy has come under fire from the European Court of Human Rights for being the last major Western country to give same-sex couples any rights on issues like parenthood, and surrogacy is already illegal in the country. This bill will come before Parliament on January 26, no doubt with strong feelings from both sides.

Proponents of the plan say this would protect the rights of a child if its natural parent died. Opponents such as Alfano say it would open the way for gay couples to seek children via surrogate mothers.

Surrogacy is illegal in Italy and can lead to prison terms. Looking to circumvent the law, a number of couples have used surrogates abroad, but the status of their children is legally shaky and has led to prolonged battles in the Italian courts.

There’s so much here to be furious about. This takes away rights from so many people: the rights of same-sex couples to start families, the rights of women to control what happens to their own bodies, the rights of children to be legally connected to and protected by the adults who care for them. This is in no way supporting “family values,” whatever that means. Absurd.

January 8, 2016
What Does the Bible Say About Abortion?
Next Post