Franklin Graham: Jesus is the “Only Cure” for Gun Violence January 8, 2016 Hemant Mehta

Franklin Graham: Jesus is the “Only Cure” for Gun Violence

Franklin Graham, the Christian evangelist who seems to instinctively disagree with everything President Obama says, couldn’t bring himself to admit that the common sense gun safety measures proposed by Obama made any sense.

So he offered his own ideas for how to reduce gun violence.

Like Jesus. Because Jesus is his goddamn answer to anything, no matter how ridiculous it sounds: 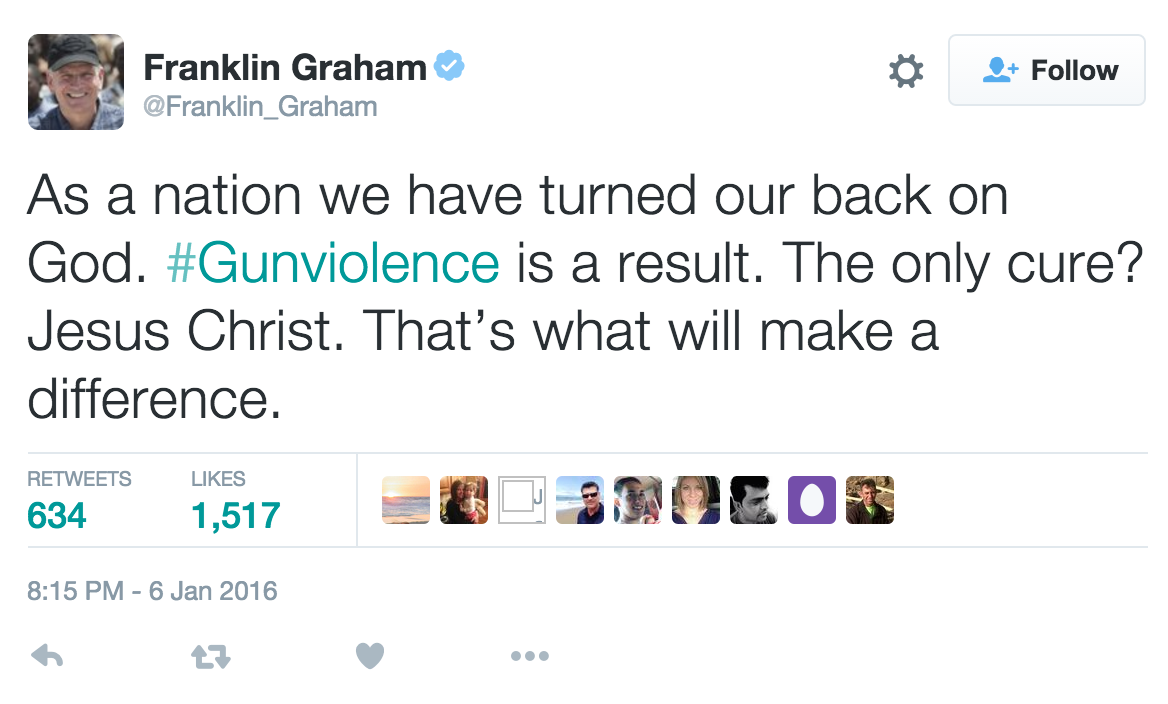 As a nation we have turned our back on God. #Gunviolence is a result. The only cure? Jesus Christ. That’s what will make a difference.

Well, Jesus certainly didn’t help when a Christian shot and killed three people at a Planned Parenthood in Colorado or when Christian Scott Roeder killed Dr. George Tiller. And I don’t recall Jesus breaking out his concealed weapon as he was getting crucified.

The idea that God is the solution to gun violence means nothing when God is Graham’s solution to everything and it never works. Belief in God leads to people like Franklin Graham, and that should be reason enough to run the hell away from theism.

Actually, even Graham doesn’t think God is enough, since he also offered other recommendations: 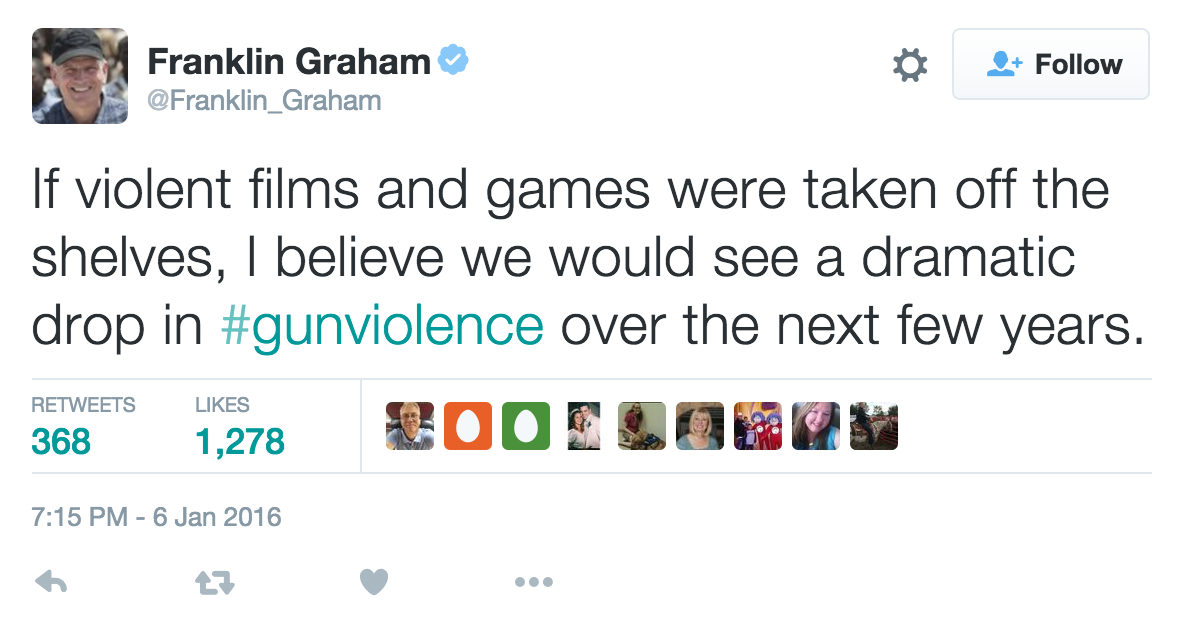 If violent films and games were taken off the shelves, I believe we would see a dramatic drop in #gunviolence over the next few years.

His views haven’t changed since the ’90s and they’re just as wrong now as they were then. Can’t wait for his next tweet about Marilyn Manson.

I’m surprised he forgot to blame homosexuals. Gay people are *totally* the cause of gun violence. And tornadoes.

Here’s an idea: Maybe if conspiratorial, anti-government radicals who lack the ability to think critically didn’t instill hatred and paranoia in people even more gullible than themselves, we’d see at least a slight reduction in gun violence.

But, you know, I’m sure everyone listening to the voice of their imaginary friend will be just as effective.

I’ll give Graham some credit, though. He also said this: 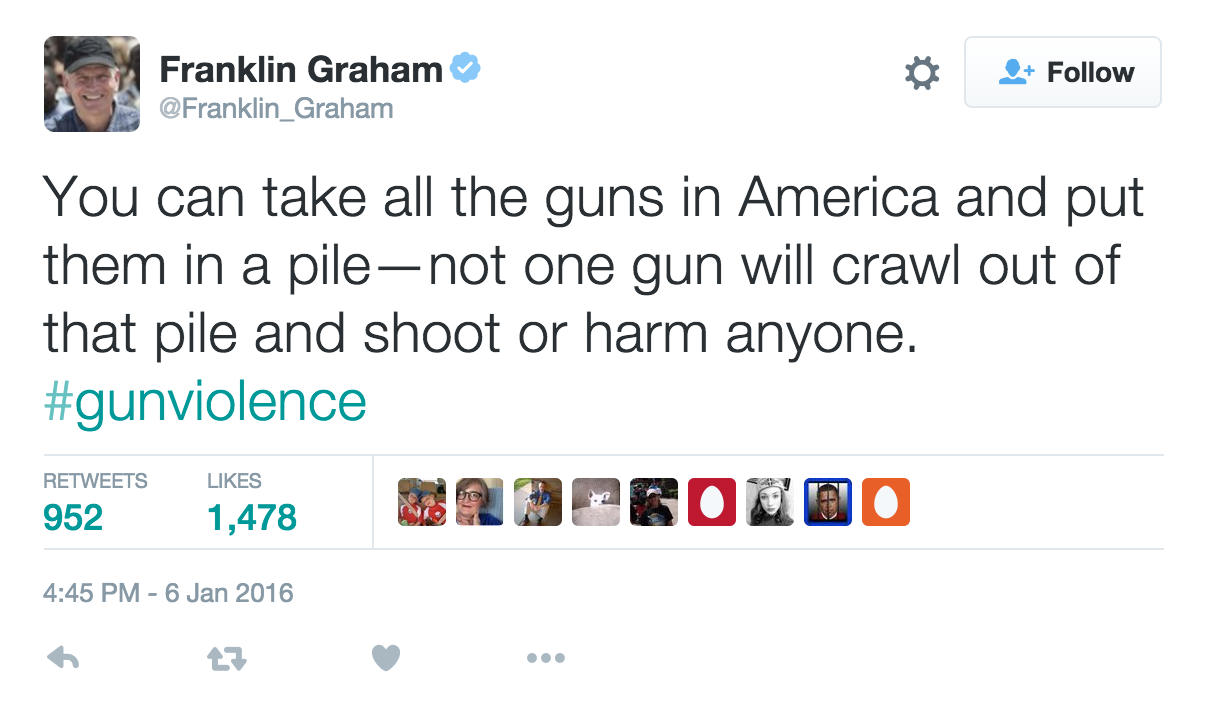 You can take all the guns in America and put them in a pile — not one gun will crawl out of that pile and shoot or harm anyone. #gunviolence

Tell you what. I’ll consider agreeing with you on the second part if you go ahead and do the first part…

Everyone pat Franklin Graham on the back. He finally had a good idea!

January 8, 2016
God Is Done With Drunken Snowmobilers Expecting a Near-Death Experience
Next Post

January 8, 2016 Archbishop Attributes Domestic Violence to Women Wanting Divorces and a Lack of “True” Marriages
Browse Our Archives
What Are Your Thoughts?leave a comment