According to a Creationist Video, 3 + 3 = 6 is Somehow Proof of God’s Existence

In the latest episode of Creation Today (which I’m sure you all binge-watch), host Eric Hovind explains how God and mathematics are intertwined.

There’s a great moment near the beginning where Hovind tells us how incredibly far mathematics has come, before giving examples that go no further than things you’d hear in high school: “You think about how far math has come, we’ve got binomial theorems, bounded functions, dilation of graphs, square roots, pi…” It’s as if math has never gone beyond that in his mind. But it’s not surprising given that his knowledge of biology barely goes beyond a high school level, either, and yet he claims with confidence that expert scientists are lying to themselves about evolution.

I was going to make fun of that… but then I saw the “Creation Minute” segment. It begins at 6:23 and really gets to some tough problems: 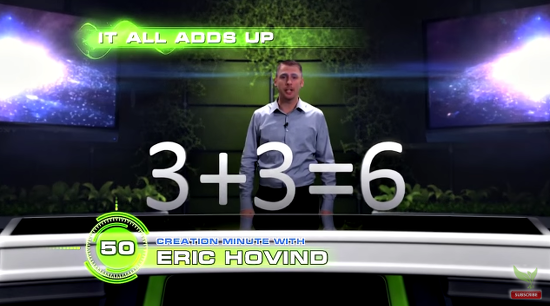 The point of that segment, which he makes near the end, is that math is abstract. But how did humans in a material world think of something so abstract and immaterial? The only way is if God created it for us. Hovind thinks God created math to guide this world — the idea that the universe could just naturally obey certain rules is beyond him.

But just because something is abstract doesn’t mean God’s responsible for it. Quick: Think of a unicorn. It’s not really there. That’s not proof of God’s existence.

There is a longstanding philosophical debate about whether mathematics was invented or discovered — but none of that suggests anything about God.

And invoking famous mathematicians who believed in God, like Isaac Newton (who is references in that clip), is just silly. He lived in a time before we knew about genes, DNA, evolution, etc. When you have no answers available to you, God makes a lot of sense. When those gaps start getting filled, though, clinging to the God hypothesis is ridiculous.

Anyway, just enjoy the video and its “complex” ideas. And then sleep soundly knowing that this represents the best and brightest the Creationist community.

January 9, 2016 Mark Zuckerberg, in Five Words, Reminds Us of the Importance of Vaccines
Browse Our Archives
What Are Your Thoughts?leave a comment