Katherine Stewart reports on a disturbing trend that’s not news to regular readers of this site: Christians who offer anti-bullying, sex education, and science programs to public schools, with the actual goal of seeking converts. 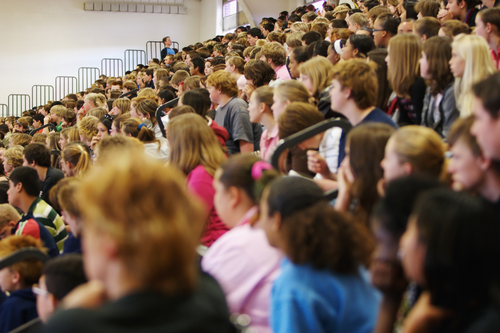 How do they pull that off? Sometimes they never explicitly mention Christianity. But they promote ideas familiar to anyone in conservative circles, like the notion that there’s something wrong with you if you’re not abstinent until marriage:

… facts never get in the way of [Chastity Project founder Jason] Evert’s depiction of the dire consequences of premarital sex. “The sooner [a young woman] starts [to have sex] … she becomes more likely to have more breakups, STDs, out of wedlock pregnancy, become a single mom, live under the poverty level, have a divorce, be depressed, and on and on,” he says. “The longer a girl waits for sex, the happier she’s going to be.”

For Evert, the dangers of contraception far outweigh any possible benefit. “Girls are just lied to about this stuff today,” he says. “They’ve got college girls in America getting hip replacement surgeries because their bones are so brittle from being on the birth control shot.”

Sometimes they wait until the end of an ostensibly secular assembly to promote the bigger, better religious assembly taking place later that day:

In November, students at Read-Pattillo Elementary School in New Smyrna Beach, Florida, were treated to a lunchtime presentation called Miracle of Science. After running through a series of tricks involving chemical reactions, the instructor wished the children “a blessed day” and invited them to attend an evening event called Family Night, which also took place at the school.

Miracle of Science is the supposedly secular arm of God Science, a ministry that promotes creationism and whose doctrinal statement endorses Biblical inerrancy.

It’s bad enough that the information is sometimes inaccurate or misleading. What’s really upsetting is how administrators at these schools are often complicit in the ruse:

At Read-Pattillo Elementary School, according to parent Erin Trimarco, religious activity at the school increased markedly after a change in administration. When she learned that the leaders of Miracle of Science push creationism and scientific illiteracy, she registered her concern, at least at first. Now, Trimarco says, “I no longer voice my concerns directly to the public school administration, since previous grievances were not received well.” (The school did not respond to requests for comment.)

In any other context, we’d be talking about liars. They mask the true intentions of their performances. It’s all a Trojan Horse and they can’t wait to get inside the gates.

But because it’s lying for Jesus, it’s essentially sanctioned by evangelical churches.

Just imagine, though, if any non-Christian group attempted to do just once what Christian groups are doing all over the country. Right wing groups get worked up over commercials featuring gay parents. Who knows how hysterical they would get if a pro-science assembly was really a project of American Atheists to convince kids to abandon their faith. (Though they wouldn’t say that until the evening show. You know, just to make sure they’re not breaking the rules.)

We’d never hear the end of it.

January 6, 2016
The Contradictions Rarely End When We're Talking About Religion
Next Post

January 7, 2016 American Family Association Distributes Graphic with Fake Founding Father Quotation
Browse Our Archives
What Are Your Thoughts?leave a comment