He also argued that the state’s ban on gay marriage, legally and legislatively, trumped national law:

In Moore’s opinion, the Supreme Court’s ruling is irrelevant because Alabama wasn’t one of the four states represented in the Obergefell lawsuit… even though the decision legalized marriage equality nationwide.

Not everyone buys that line of thinking, though. In fact, there was an Alabama judge who said a year ago that the state would have to comply with whatever the Supreme Court decided in Obergefell:

That justice was… Roy Moore.

The man tasked with ruling on the most complicated issues in his state can’t even make up his damn mind on a very simple one.

Moore just wants to cherry pick which laws to follow — and if a law doesn’t comply with his narrow interpretation of the Bible, to hell with it.

Remember: This is the same judge who once installed a Ten Commandments monument into the courthouse in the dead of night and refused to remove it even though it was illegal. (He was removed from office for his defiance, though he was later voted right back into the Supreme Court.)

In a battle between the Bible and the Constitution, Moore’s picking the Bible every time. It’s the reason he’s completely unfit for public office.

At least some of the judges under him understand how the law works. 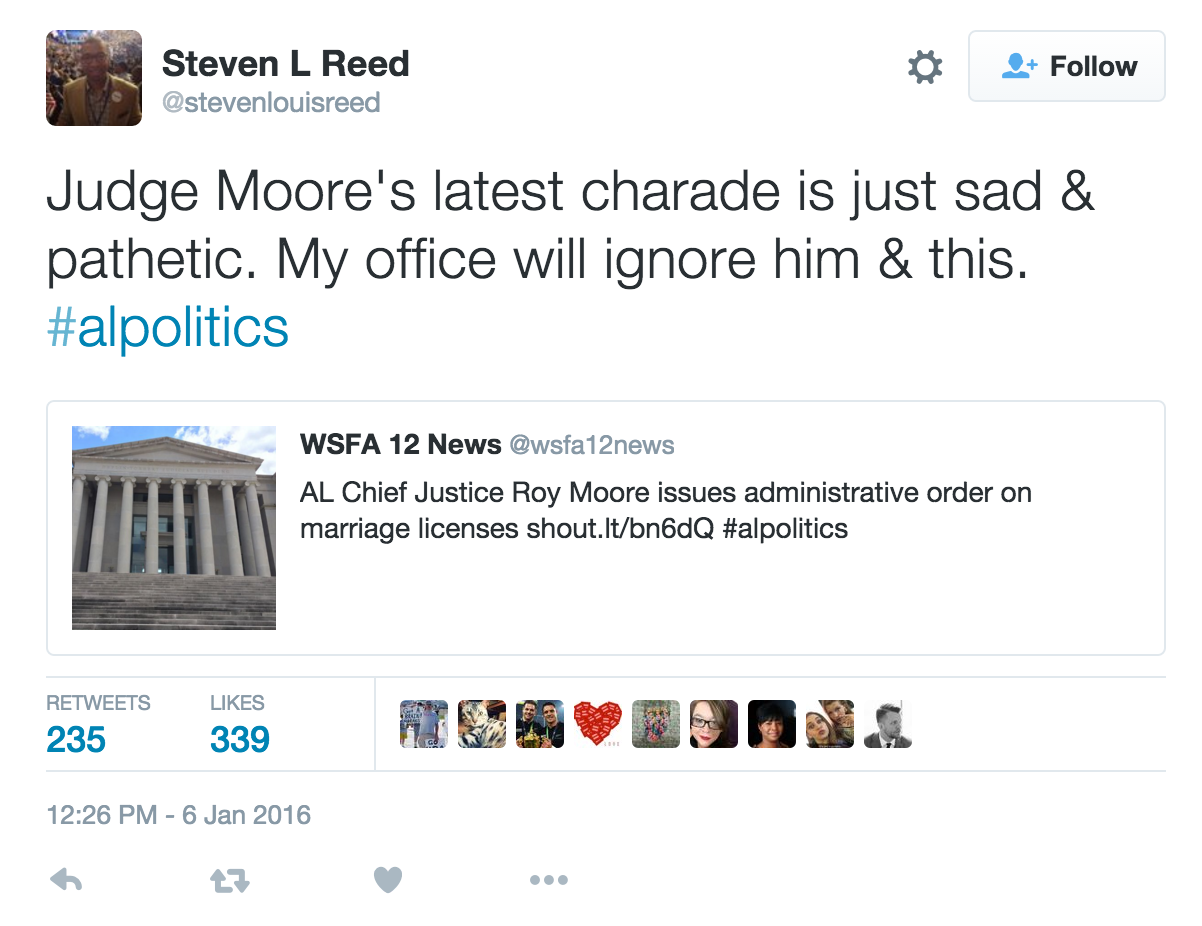 Several church/state separation and LGBT groups also lashed out at Moore’s attempt to circumvent the law.

“Roy Moore is the judicial equivalent of segregationists like George Wallace who stood in a schoolhouse door to block equality and freedom,” Lynn said. “Wallace lost, and Moore will lose too.”

“What Moore fails to mention” said [Freedom From Religion Foundation Co-President Annie Laurie] Gaylor, “is that he caused much of this confusion by ordering his subordinates to violate a Supreme Court ruling and the supremacy clause of the U.S. Constitution. His religion has blinded him to his constitutional duty.”

Gaylor added: “Every day that consenting, loving couples are delayed their marriage licenses is a violation of their basic human rights in the name of Moore’s tyrannical god. It’s time for Alabama once again to rid itself of Moore’s theocratic influence.”

“Yet again, Chief Justice Roy Moore is flagrantly defying the rule of law, and empowering those who wish to stand between same-sex couples and their constitutional right to marry the person they love,” [Human Rights Campaign] Legal Director Sarah Warbelow said. “Regardless of what Roy Moore says, marriage equality is the law of the land. His obstructionist tactics tarnish the reputation of the great state of Alabama, and we urge all of the state’s probate judges to issue licenses to same-sex couples, as is their duty under the law.”

The state’s own Attorney General Luther Strange said this summer that Alabama would comply with the Supreme Court’s ruling. It seems like the only people who think Moore has any credibility on this matter are other Christian theocrats. You can expect pastors and Republican Presidential candidates to lend their support to Moore before long, too.

This is what modern day evangelical Christianity looks like. They use the Bible as a weapon against minority groups who dare to fight for their civil rights. Any decent Christian ought to condemn everything Moore is doing here. Even if you oppose marriage equality in your church, there’s no justification for what he’s doing.