Minnesota School District Apologizes After Pledge of Allegiance is Recited Without “Under God” January 6, 2016 Hemant Mehta

Yesterday morning, whoever recites the Pledge of Allegiance over the loudspeaker at Prior Lake High School in Minnesota must have left out the words “Under God.”

I’d like to think it was deliberate — an homage to the original version of the Pledge before Christians added the words in 1954. But even if it was a mistake, it shouldn’t have been a big deal.

Whatever the reason, the school district later issued an apology on Facebook: 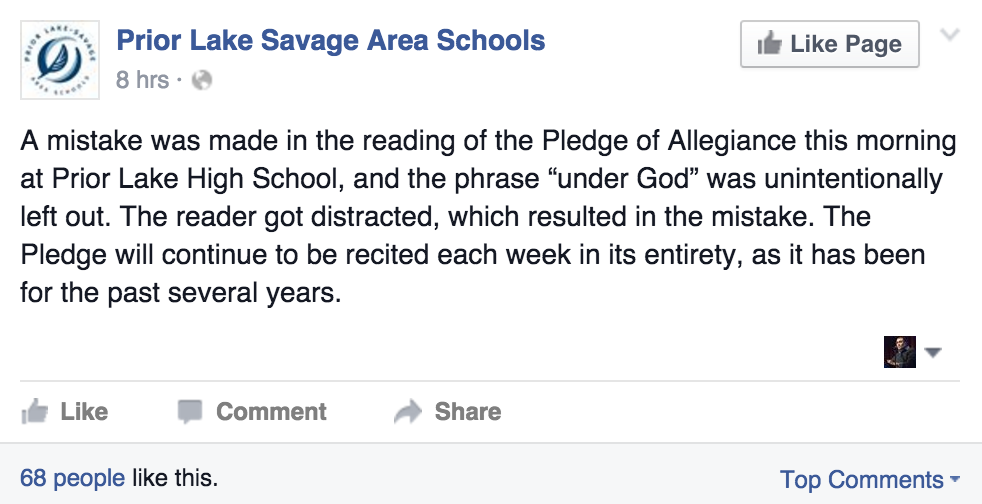 A mistake was made in the reading of the Pledge of Allegiance this morning at Prior Lake High School, and the phrase “under God” was unintentionally left out. The reader got distracted, which resulted in the mistake. The Pledge will continue to be recited each week in its entirety, as it has been for the past several years.

This is all speculation on my end, but one of two things had to happen for them to issue that apology:

1) Some student or parent was incredibly angry about the omission and the administrators made the public statement to quell an uproar.

2) No one said anything, but District officials instinctively felt the need to cover their ass, just in case.

It’s just funny how seriously some people take these ritualistic mentions of God. As if something awful will happen, or some rights are being stripped away, if you don’t say it.