If there’s one thing we know about religious conservatives, it’s that they’re closeted meteorologists. They always seem to have explanations for various weather-related phenomena. That hurricane? It wreaked havoc because God was angry about gay people.

And now the Jehovah’s Witnesses say that a typhoon in Micronesia was just God’s way of delivering sand to people building a “kingdom hall.”

In the latest episode of the Jehovah’s Witness’ online show JW Broadcasting, construction overseer Travis Brooks explains how sand was hard to come by when his team was building a new hall. But Jehovah answered their prayers by way of a supernatural disaster.

Church watchdog Lloyd Evans has the clip at the 4:26 mark below: 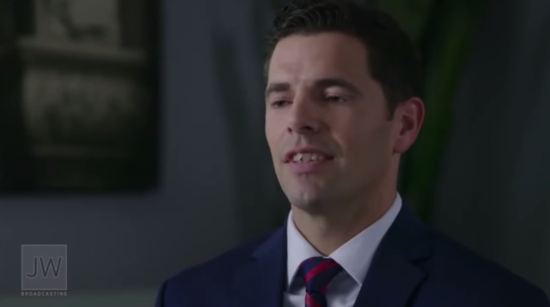 No thought is given to the possibility that this was merely a fortunate coincidence. In the mind of Brooks, divine manipulation of the weather was the only answer for sand becoming readily available, thus enabling the success of a building renovation. And the Governing Body clearly ratified the “miracle,” because they signed off on the episode in which this experience is related.

But if you were one of the relatives of the 33 Jehovah’s Witnesses who perished on November 8th when Typhoon Haiyan ploughed into the Eastern seaboard of the Philippines, you might be less endeared by the sand story.

There’s a saying that the simplest explanation is usually the correct one.

In this case, they’re using a ridiculously complicated explanation — but it’s okay because it lets them invoke God.

January 6, 2016
Minnesota School District Apologizes After Pledge of Allegiance is Recited Without "Under God"
Next Post