Gregory and Melanie Magazu have three kids, including a newborn, but they really wanted to adopt more. They felt that if they were able to provide a home for foster children, it’s something they had to do. And I admire any couple willing to open up their homes like that.

The problem was that their Christian faith required them to hit their children. 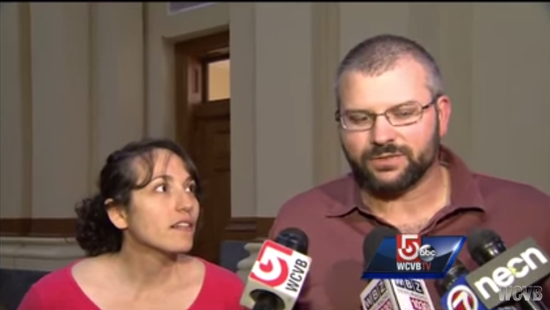 When a social worker came to observe their home life and interview them, the spanking issue came up:

“As soon as we got to the spanking question,” Greg says, “it was like ‘Oh. You spank your children? Well, you need to stop doing that.’ And when we said we weren’t going to stop doing that they said ‘No kids for you.’”

Indeed, the Magazu’s were rejected as foster parents because they believe the bible encourages spanking as a loving form of measured punishment — never in anger — always beginning with a chat about the reason and ending with a hug.

The Magazus compromised and said they wouldn’t spank their foster kids — just their biological ones — but the Department of Children and Families still rejected them. A lot of these foster kids come from abusive homes, they said, and even being around abuse wouldn’t be in their best interest. Made perfect sense.

Spanking is legal in Massachusetts — but many have frowned upon it in recent decades amid studies that have asserted it does more harm than good.

One study by the American Psychological Association asserted links to aggressive and anti-social behavior in children, along with low self-esteem.

“We have not seen any of the negative things studies claim can happen when you spank your kids,” says Greg.

Of course they didn’t. Parents who spank their kids rarely see any downside to it.

But even if you put aside the spanking for a second, it was also disturbing that these parents, despite hearing what’s best for the foster children, refused to change their ways to accommodate those kids’ needs. That was a bad omen.

But it didn’t stop the Magazus from suing the State a few years ago, calling this a form of religious discrimination. Back in September, the Massachusetts Supreme Judicial Court heard arguments from both sides.

“The Hebrew and Christian scriptures tell us whoever spares the rod hates his son, but whoever loves him is diligent to discipline him,” said the couple’s attorney, David Bodanza. “DCF is saying that Christians and Jews need not apply.”

That was ridiculous. This had nothing to do with religious discrimination. It didn’t matter that the inspiration to hit their kids came from the Bible. An atheist couple who spanked their kids would also have been denied foster children — and rightfully so. (Keep in mind that plenty of Christian parents don’t take the “spare the rod, spoil the child” idea literally. Many interpret it differently.)

The state may not have been able to stop parents from spanking their own kids, but they could make sure foster kids were in homes where abuse, faith-based or otherwise, wasn’t tolerated.

“Just deciding, well, because you spank, that’s it, you’re out, just automatically disqualifies a lot of families that could be fully appropriate to help with this huge burden we have here in Massachusetts,” Gregory Magazu said.

Yes, it disqualifies a lot of families who have no business raising foster children. I don’t care if they think their hearts are in the right place. Their hands aren’t.

I’m thrilled to say that the state’s Supreme Judicial Court has finally ruled on this matter. On Monday, the justices upheld the original ruling, forbidding the Magazus from becoming foster parents.

Even though hitting kids was part of their deeply held religious beliefs, the Court felt the state had good reason to override that:

… although the department’s decision imposes a substantial burden on the Magazus’ sincerely held religious beliefs, this burden is outweighed by the department’s compelling interest in protecting the physical and emotional well-being of foster children.

It’s good to see common sense prevail. Just because your religious beliefs allow you to hit kids doesn’t mean society has to allow it in every case. Now let’s hope these foster children find a home where abuse isn’t in the equation.

(via Religion Clause. Image via YouTube. Large portions of this article were published earlier)

January 6, 2016
Jehovah's Witnesses Say God Used a Typhoon to Deliver Sand for the Building of a New Kingdom Hall
Next Post