We know Millennials are less likely to be religious than any other generation. But a new report from the Pew Research Center shows that their faith in religious institutions has dropped significantly over the past five years.

In 2010, 73% of Millennials said churches and religious organizations had a “positive effect on the way things are going in this country.” At the time, it was the highest percentage among all the generations polled.

That number has fallen to 55% today, the lowest of all generations: 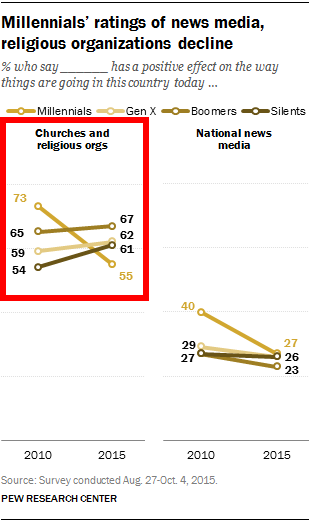 Look at that beautiful drop.

Since 2010, Millennials’ rating of churches and other religious organizations has dipped 18 percentage points: 55% now say churches have a positive impact on the country compared with five years ago, when nearly three-quarters (73%) said this. Views among older generations have changed little over this time period. As a result, older generations are now more likely than Millennials — who are much less likely than their elders to be religious — to view religious organizations positively.

I’m not surprised at all. When you think of religious institutions today, you think of places that remain opposed to marriage equality, where women are seen as inferior, where scandals run rampant, where financial transparency is a joke, and where tough questions are met with bad answers.

Maybe the most amazing aspect of those results is that more than half of Millennials still think positively of religious institutions.

The longer churches remain entrenched in their ways, though, the faster that approval rating will fall.

January 5, 2016
Another Christian YouTuber Says God Forgave Him for His Online Affair
Next Post