Dog with Slice of Ham on Face Gets 1.3 Million Facebook Prayers (and Counting) January 2, 2016 Tracey

Dog with Slice of Ham on Face Gets 1.3 Million Facebook Prayers (and Counting)

A dog with a slice of ham on his face has raised an impressive 1.3 million prayers on Facebook, a generously distributed and worthless form of imaginary currency.

The photo was posted to Facebook by Stephen Roseman a couple of days before Christmas. Roseman claimed the dog was badly burned and disfigured in a house fire while trying to save his family — clearly a hoax upon examination of the image. Poking fun at one of the most common forms of magical thinking on Facebook, Roseman requested, “One like = one prayer, One share = ten prayers.” 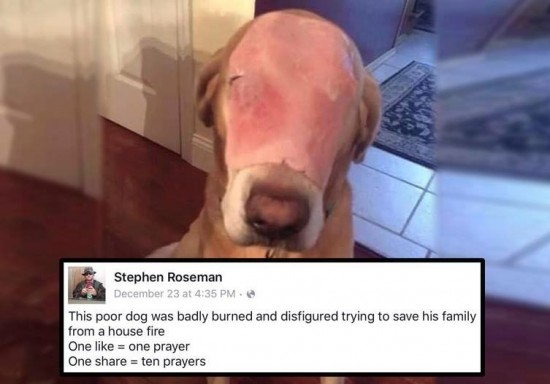 For the most part, people immediately recognized that the pork product was not scalded flesh. Around Day 3, though, Roseman started receiving what appeared to be genuine prayer messages — “God bless him” and “Hero!! Shared.”

By Day 4, people were furiously reporting the post, saying they had mistakenly shared it, and sending Roseman death threats.

I’ve literally lost count on how many death threats I’ve accumulated because of Ham Dog, I’m not concerned, but rather amused, regardless, I’m armed everywhere I go anyways. I find it motivating. If interested for the laughs, Private message me. I got plenty of proof.

Hopefully, those death threats are as empty as Facebook prayers. 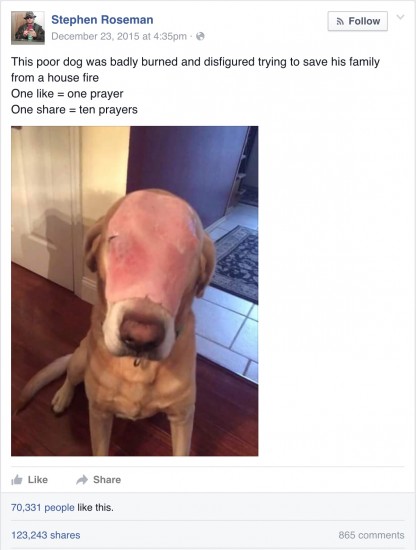 To those who are concerned, the ham was successfully removed and the dog is expected to live a normal life.

January 2, 2016 This is Why She Left the Jehovah's Witnesses
Browse Our Archives
What Are Your Thoughts?leave a comment