Jewish comedian Roseanne Barr went on a Twitter tirade this week that began with her calling atheists “very anti-semitic.” 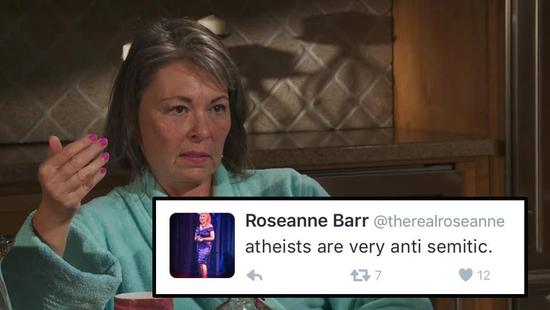 After the initial tweet, I tried to score along, but what followed was largely incoherent. It’s not easy to make a clear point using only 140 characters, but it doesn’t seem like the Twitter limitation was the problem.

Amidst the slurry of calling those who challenged her “toads,” she sloppily copied a line from a Wikipedia page titled Criticism of Atheism.

Ignostics propose that every theological position (including agnosticism & atheism) assume 2 much abt th concept of God,who is meaningless.

She then went on to claim that Judaism was the Abrahamic religion most often targeted by atheists:

@Bacon_Eater judaism, the most moderate of abrahamic religions is almost always the target of atheists.

Atheists have some bones to pick with Judaism, sure, but we’re not burning down synagogues. “Anti-Semitic” is a strong label, implying racism, hatred, and discrimination. We’re not wishing you harm. At the peak of our disdain for your archaic rituals, we’re writing articles and pointing out absurdities. To name a few:

These practices deserve to be challenged.

But then she backtracked a bit on her absolutes.

The “atheists are very anti semitic” tweet was deleted and a new version popped up.

many atheists are anti semitic.

Okay, so she admits not all of us are anti-Semitic. Better, but not quite right.

Personally, I’m saddened that Roseanne has such a low and misguided perception of atheists. As a former Green Party presidential candidate, who does she think her audience is: the devoutly religious? I grew up watching her sitcom, Roseanne, and always found the characters and conflict to be realistic, with an underlying humanizing message that never required supernatural beliefs to resolve. She’s getting bad information from somewhere, and she’s lashing out against anyone who tries to correct it. For her sake, I hope that changes.