Reader Justin Scott, an Iowan who has had exchanges with Sen. Bernie Sanders and Sen. Rick Santorum, attended a gathering with New Jersey Governor Chris Christie yesterday as he made his case for why voters should caucus for him as President next month.

Scott asked me before the event if there were any questions I wanted him to ask, so I jumped on that. I was curious how Christie planned to defend separation of church and state when his party seems intent on tearing down the wall between them.

Justin, to his credit, not only asked the question, he got the full response on video: 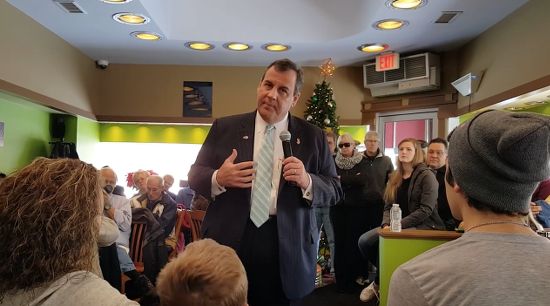 Well, first of all, I disagree with the premise of your question. I think that the Republican Party believes — and I’d say I believe — that everyone in this country should have the right to pursue their religious beliefs, or lack thereof, as aggressively as they want to as long as two things happen: One, that you do so without committing violent acts. And two, that you do so without trying to impose your religious views on somebody else.

Now this — you bring it up in the context of atheism — but we’re having this conversation in the context of Islam right now, too. The fact is, again, this is the difference between experience and inexperience. You have one candidate who says “Ban all Muslims from the United States.” Okay… I guess that would be an interesting thing to try to do, but let’s put aside the Constitution and all the rest of it. I assume that what he means by that is that if we keep all Muslims out, we’ll be safer. That’s just wrong. That’s just fundamentally incorrect, based upon our experience. We don’t need to do that. What we need to do is to get the intelligence that we need to find out who the radical Islamic jihadists are. That’s who we want to keep out.

New Jersey has the second largest Muslim-American population of any state in the country. Michigan is first, New Jersey is second. I’ve dealt with the Muslim-American community now for 13 years, as the federal prosecutor after 9/11, and now as the Governor of the state. What we did after 9/11 was to go back to mosques throughout our state to say “We trust you. We want you to trust us. We need to work together to protect our state or country.” We know the difference between radical Islamic jihadists and hardworking, peace-loving Muslim-Americans. And we need to go after the people who are trying to harm us, not go after everybody. And what happens when you paint it with that broad a brush is the innocent folks don’t want to cooperate with you, either, because they’re afraid. They’re afraid just because of their religious beliefs, that we’re going to take action. We shouldn’t be doing that. We should be doing is going after the bad guys…

And on your larger question, what this country stands for on religion are the two things that are in the First Amendment… Freedom of religion — freedom to practice your religion — and the non-establishment of religion. I’m a Catholic. I believe whole-heartedly in my faith, and we are teaching our children our faith in hope that they follow that faith as well.

You as a father should have the absolute right to do the same thing I’m doing, however you see fit.

[Justin Scott: I’m letting them make their own decision.]

[Justin Scott: I think my biggest concern is legislation that’s based out of a certain religion.]

I just don’t see it.

[Justin Scott: If it discriminates against–]

[Justin Scott: And I appreciate that.]

— and be able to make your judgments. But beyond that, you make your own calls. I’m not offended by that in the least…

We don’t have that in New Jersey, so I’m not gonna go state by state…

I know Christie was speaking off the cuff, so I’ll cut him some slack here, but he’s wrong that freedom of religion “doesn’t mean we have to put up with someone telling you what you believe is invalid.” That sort of criticism is absolutely acceptable. When Christians say you have to believe in the divinity of Christ to go to Heaven, they’re implicitly telling non-Christians their beliefs are invalid. Same thing when atheists poke holes at religious “logic.” There’s nothing wrong with any of that from a legal standpoint.

The more important issue, though, is that Christie doesn’t “see” his party furthering the agenda of one specific religious group. If that’s what he thinks, he needs to get his vision checked.

His party has opposed marriage equality, reproductive choice legislation, climate change resolutions, proper science and sex education, etc. almost entirely due to the Christian beliefs of elected Republicans — not any rational, objective reasons that can be debated. In some cases, even after the issue has been settled, like with marriage equality, there are Republican Presidential candidates like Mike Huckabee who still say they’ll refuse to enforce the law because their faith compels them otherwise.

That’s what Justin was referring to. Christie had a chance to distance himself from the radical Christians in his own party, but he didn’t have the courage to do it. Instead, he said he didn’t even know what Justin was talking about.

December 31, 2015 Three Biblical Principles That Didn't Make It Into the Religious Right's Bible
Browse Our Archives
What Are Your Thoughts?leave a comment