Of all the misinterpretations in the giant game of Telephone known as the Bible, this may be my favorite theory.

We’ve all heard the story of how Eve was supposedly created from Adam’s rib… even though men and women have the same number of ribs. But Professor Ziony Zevit from the American Jewish University in Maryland wrote in his 2013 book What Really Happened in the Garden of Eden? that this story was really the result of a bad translation. The book, which enjoyed a second life after it was reviewed in a recent issue of the Biblical Archeology Review, explained it this way: 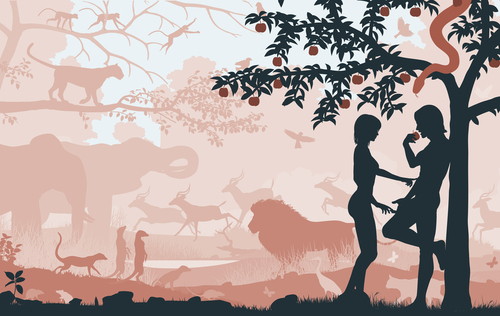 The theory came to Zevit after translating and studying the Hebrew text of Adam and Eve in the Genesis story of the Old Testament. Zevit believes the Hebrew word “tsela” does not translate as “rib,” but instead can be understood to mean “limbs sticking out sideways from an upright human body.”

As men and women do actually have the same amount of ribs (and any other sideways sticking limbs, for that matter), Zevit believes this is how the ancient Israelites attempted to explain the uniquely boneless human penis.

So Eve didn’t come from Adam’s rib, Zevit said. God created her using Adam’s dick bone. And that, you see, is why the male appendage now consists of a whole bunch of tissues instead.

And while some reviewers have called this theory “laughable” and “outlandish,” remember that the alternative is no more plausible. Whether or not Zevit’s translations are accurate is irrelevant. The only difference between his theory and the rib story is that the former is newer.

Don’t tell that to the journal’s readers, though. One canceled her subscription with this message:

Reader Sue Glaze from Oakland, Maryland, said: ‘I write to express my disappointment with your magazine. I wish to cancel my subscription.

‘Come on now, Eve being created from Adam’s penis bone, rather than his rib?

‘That is plainly not a Bible teaching. I do not need and will not read articles that damage my faith or attempts to cause me to doubt what I know is the truth from the Bible.’

Look: There’s no evidence of an actual Adam and Eve, that one came from the body of the other, or that sin was unleashed in the Garden of Eden. It’s all myth. This discussion amounts to little more than a bunch of religious academics arguing over the color of a unicorn’s horn.

What’s amazing is that some people take any of this literally.