This Irish Film is About a Young Atheist Who Challenges Religious Authorities December 30, 2015 Hemant Mehta

Here’s the movie you really want to see. It’s a (very) short Irish-language film about an eight-year-old atheist who challenges religious authorities and — does it really matter what else? That’s worth the price of a ticket already.

The movie is called Rúbaí: 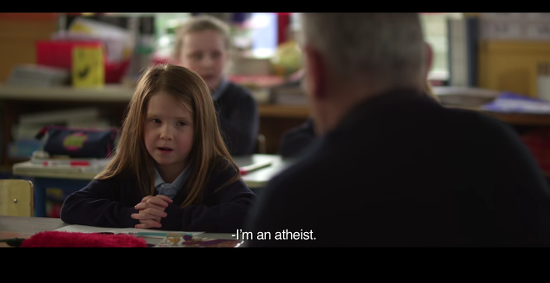 Rúbaí recently won the jury prize for Best Short in its category at the Babel Film Festival in Sardinia, which is a festival for films in minority languages…

“I didn’t want to make a controversial film, I wanted to make a film about a little independent thinker, who would really send a message out and challenge our traditions in society,” said the director.

The 12-minute short is actually a couple of years old, but it’s still making the film festival rounds. No word yet on when it’ll be available online. I’ll post an update when that happens. (Update: I replaced the trailer above with the actual movie.)

December 30, 2015
What I'm Doing to Make Sure Atheists Have a Voice in the Iowa Caucuses
Next Post

December 31, 2015 Survey: Americans Want Religious Liberty, but Christians Need Protection More Than Muslims
Browse Our Archives
What Are Your Thoughts?leave a comment