What in God’s name is going on in church these days? It used to be that you’d go to church and listen to your pastor give a really boring sermon while you’d fight to keep your eyes open. 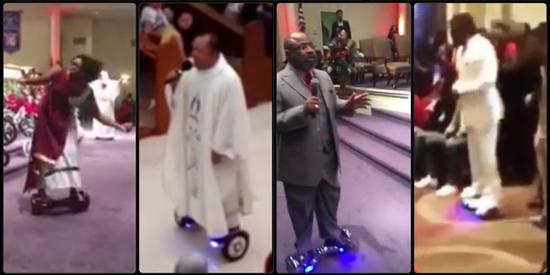 These days you go to church and your pastor is zipping through the congregation on a hoverboard — still giving a really boring sermon.

Now you can’t look away. You begin to question if this level of swagger is an abomination. Is it too flashy? But as you raise an eyebrow, suspicious there’s a danger in upstaging Jesus, your pastor jets past you in a neon blue flash, setting into motion a breeze that tickles your arm hairs like angel whispers. Before coming to a halt at the pulpit, he does a double-360 and receives a standing ovation, “Satan who?! Praise Jesus! This church is AWESOME!”

Okay, so this probably isn’t your church, and not just because you’re atheists.

But here are three churches that have made the hoverboard dream a reality:

“Pastor Raahhhhh” in the UK floats (and dresses) like a cloud.

This praise dancer in Memphis narrowly missed a “wardrobe malfunction.”

Of course that same Memphis church has a hoverboarding pastor…

And out of left field, a Catholic priest in the Phillipines, who was actually pulled from his church by upper-management to reflect on his actions.

The archdiocese made this statement concerning the priest’s joyride:

That was wrong. It is not a personal celebration where one can capriciously introduce something to get the attention of people.

The priest said that it was a wake-up call for him. He acknowledged that his action was not right and promised that it will not happen again.

Yeah, priest! The only publicity they’ll tolerate is bad publicity.

It’s so like the Catholic Church, isn’t it, to recoil when someone lightens the mood a bit?

December 30, 2015
BuzzFeed's "I’m An Atheist, But I’m Not..." Statements Should Be Obvious to Most Viewers
Next Post