You may recall this is the same city where auto repair shop owner Brian Klawiter said earlier this year that he would not serve gay customers. (How he’d know they’re gay is anyone’s guess.) 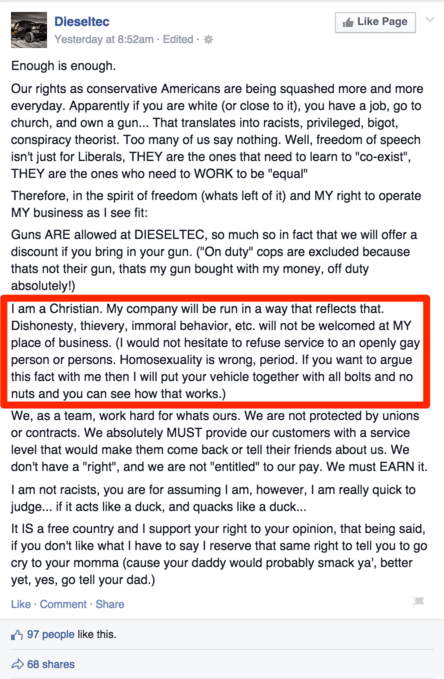 That’s why Belstra, according to the advance text of his remarks, made sure to reference the important of civil rights and LGBT equality in particular:

Thank you Mayor Maas and the Grandville City Council for having me speak today. My name is Steven Belstra and I am not an ordained minister or priest of any faith. I request from the council and our community that we don’t turn towards faith or religion to guide government decisions but rather good will towards all people in our community.

I speak for the minorities in the area who identify as being secular humanists, atheists, and one of the fastest growing groups in America, the non-religious. Grandville contains many different people who have different beliefs, traditions, and cultures all of which we want to see considered when making decisions for our community. I ask that for today and all future meetings that we can approach decisions this way. But it isn’t just in our local city council meetings where this should apply, but in all other aspects of human interaction.

2015 will be remembered as a year that major human rights decisions were made in the Obergefell vs Hodges case which granted state recognition to all same sex couples. This decision by the Supreme Court of the United States is a great example of what I am alluding to.

It is in our best interest as a community to view all of our citizens as equals, regardless of their beliefs of an afterlife or their beliefs about human sexuality. So what I ask of my local city council is that you govern with reason and empathy towards all people, regardless of the church I do or don’t attend, the person that I marry, or the beliefs that you may or may not share with other citizens of the community.

Thank you for your time council.

December 29, 2015 Neil deGrasse Tyson: If God Exists, Where's the Benevolence in the Universe?
Browse Our Archives
What Are Your Thoughts?leave a comment