Back in March, I posted about how Faith Christian Church, which has operated on the campus of the University of Arizona for decades now, was essentially a criminal-led cult.

That was according to 30 former members and employees (and their parents) who said it took a long time to get over what happened to them. Carol Ann Alaimo and Emily Bregel of the Arizona Daily Star wrote this at the time:

Their stories include reports of hitting infants with cardboard tubes to encourage submission, financial coercion, alienation from parents, public shaming of members and shunning of those who leave the church or question its leaders. Some say that since leaving, they’ve spent years in therapy for panic attacks, depression, flashbacks and other symptoms of post-traumatic stress disorder.

Here’s just one example of how bad things got:

“They train you as a parent that, once the babies are 8 weeks old, you have to lay them facedown. If the baby raises its head, that’s a sign of rebellion, so you smack them on the butt with the cardboard dowel,” says Rachiel Morgan, who earned a UA nursing degree in 1998 and worked for Faith Christian until 2008.

“And you keep doing that over and over until the baby doesn’t put its head up again. And that’s how you train them to go to sleep.”

There was also this:

Joan Moore, now 32 and working as a registered nurse, says she was raped as a UA freshman shortly after she joined Faith Christian in 2001. News of the rape had spread through the ranks of church leaders after she told her minister about it, Moore says. She says church elders suggested she was partly to blame for kissing the man in the first place, and, a couple years later, Hall called her a “whore.”

There were more anecdotes where those came from.

University officials claimed they had no idea all of this was going on right under their noses, but said they would conduct an investigation.

Meanwhile, a spokesperson for the larger Christian community this church was a part of dismissed the article as some sort of smear against Jesus, as if it was the reporters who did something wrong.

Dan Busby, president of the Virginia-based Evangelical Council, says Faith Christian is a member in good standing and defended many of its practices.

“The questions you have raised, compared to what we know about the church, does not give rise to a sensational story about the church,” he wrote in an email to the Star. “It is so easy for disgruntled folks who used to relate to a particular church to cast aspersions and create negative perceptions about churches that are doing good work.”

But this wasn’t just a couple of disgruntled people. We’re talking about dozens of people who were closely involved with the church making serious, specific claims about what they went through. The university, at the very least, needed to do everything it could to understand what happened, how it happened, and what steps needed to be taken so it wouldn’t happen again.

Now, in an update to the story, Bregel and Alaimo reveal that the church is struggling to stay afloat — which is exactly what it deserves. That’s happening because they’re losing the support of people like Doug Pacheco who once belonged to the church:

Pacheco, who joined Faith Christian’s predecessor church and left in 1990, said he and his then-wife accepted the church’s teachings. When the Star’s initial story ran in March, Pacheco — now remarried and living in Indiana — emailed links to the story to each of his children, now 33, 31 and 29.

“They knew just by me sending that article that dad is facing up to something here,” Pacheco, 58, said in a recent phone interview. “I got to call each of my children and tell them I loved them and apologize to them.

“Each of them said, ‘We love you, we forgive you, we’re with you.’ Ever since that time, my relationships with all three of them has just improved.”

University of Arizona officials can’t take action unless they have hard evidence of the church encouraging members to do these awful things, but they’re closely watching the three campus groups affiliated with Faith Christian. They haven’t seen anything warranting a punishment yet, despite dropping in on some meetings unannounced.

But here’s one small change they did make: For years, the University Religious Council gave students a flier during orientation warning them about religious groups that went too far, pointing out the major red flags along the way: 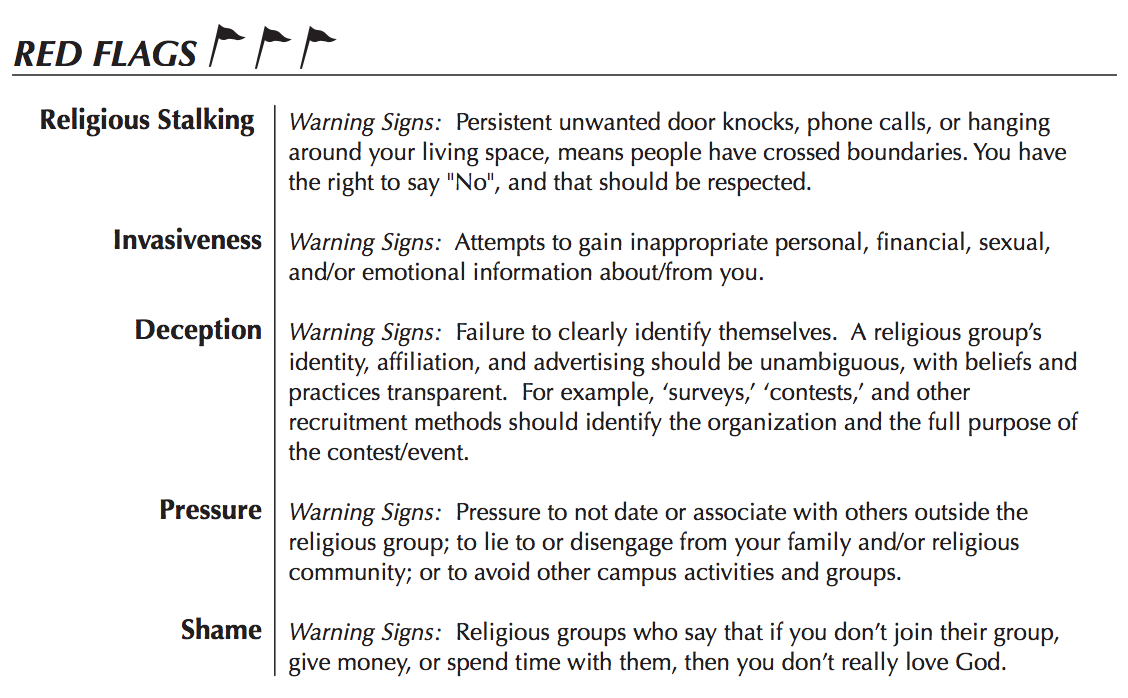 Religious manipulation includes “strategies that target vulnerable students, methods which seek to break down and then rebuild students, and instances of over-the-top niceness used as a form of entrapment,” the URC wrote.

The church, meanwhile, refuses to respond to the allegations, hoping they’ll just fade away on their own.

You can read more stories from survivors of this church at this Facebook group.

December 27, 2015 How You Can Help an International Humanist-Led Mission Trip
Browse Our Archives
What Are Your Thoughts?leave a comment